From Atwood, wisdom and a bit of wickedness 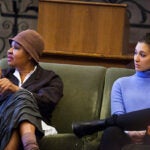 In preparing to chat with author Margaret Atwood A.M. ’62, John Lithgow told a Sanders Theatre crowd, he “fell madly in love” with her great mind and talent. On Thursday, the actor and the audience fell in love with her crisp, caustic wit, too.

When Lithgow asked Atwood how it feels to craft a line like “their clothes look like they had covered themselves in glue, then rolled around in hundred dollar bills,” this year’s Harvard Arts medalist said she doesn’t consider it wit. Instead, she thinks of it simply as “descriptive writing” and said the narrator in question “is a pretty mean old lady.”

“You’re a kind person, so you would feel that you had surprised yourself” had he written those words, Atwood told Lithgow ’67. “With this amount of malice coming from me, it’s not really surprising.”

But pressed about whether her sharp pen gives her any sense of joy, Atwood acknowledged a sort of “horrible fun.”

The medal ceremony, which honors alumni who have made outstanding contributions to the arts, kicked off the Arts First festival, an annual four-day celebration. Harvard President Drew Faust gave Atwood the award, calling her a “true social and moral force,” and praising her vast body of work, her creativity, and her “virtuosity of showing us the darkness.”

Atwood, said Faust, “forces us to see in such sharp relief that we feel compelled to share her worries and thus to act on them.”

As is customary, Atwood joined Lithgow, an actor and Arts First co-founder, for a lively conversation on the Sanders stage. The pair discussed the author’s early inspirations, process, and a selection of her works.

Atwood was born and raised in Canada. She attended Victoria College in Toronto, graduating in 1961 with a degree in English, before earning her master’s degree from Radcliffe in 1962. The author of numerous volumes of poetry, works of children’s literature, nonfiction, stories, and even a libretto for a forthcoming opera, she is best known for her novels.

At Harvard, she loved immersing herself in the daily activity of reading and writing, diving into the Widener stacks and taking classes with beloved professors such as Perry Miller, whom she called “one of the greats.”

For Atwood, poetry and prose depend on separate neurological functions. “I think poetry is closer to the musical part of the brain, and novels are closer to the narrative and conversational parts.” They also differ in that the process of creating a poem is nine parts inspiration and one part perspiration, she said, while the work behind novels reverses the equation.

“That’s why people find [poets] so annoying,” said Atwood. “They say, ‘I’m not looking out the window, I’m working.’”

Atwood said she thinks of herself as entering into a type of agreement with those who choose to pick up her books.

“You make a promise to the reader. The reader has entered into this process, which is going to be reading the book, and you have to deliver on that promise and not violate that promise.”

The ceremony was presented by the Office for the Arts, the Learning from Performers Program, and the Harvard University Board of Overseers.