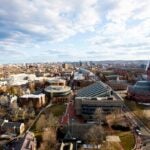 The sky was as gray as flint, and a cold wind bit hard like a March memory. But all else was celebratory at the first public event of Commencement Week, the 224th Phi Beta Kappa Literary Exercises. The weather inside Sanders Theatre was sunny, with a chance of advice.

Harvard President Drew Faust headed the procession of dignitaries, Phi Beta Kappa officers, and honorees into Sanders for the celebration of letters and passionate intellectual exchange.

Invited to speak were novelist and short story writer Andrea Barrett, who teaches at Williams College, and poet, translator, and critic Donald Revell, who teaches at the University of Nevada, Las Vegas.

Revell, whose work for three decades has drawn praise for its joy and sincerity, offered up six poems from his collection “Pennyweight Windows.” He lived through the tumult of the 1960s, and began and ended with poems inspired by protest. “Survey” professed nostalgia for the 20th century, a time that “told everyone to strike back.” In “Vietnam Epic Treatment,” that same epoch became:

The 20th-century?
It was a war
Between peasants on the one side,
Hallucinations on the other.

Barrett, who trained as a biologist and whose traction as a writer only started when she was in her 30s, has written nine novels and short story collections. “Ship Fever” (1996) won the National Book Award; “Servants of the Map” (2003) was a finalist for the Pulitzer Prize in fiction.

In her address, “The Ether of Space,” Barrett told how a story may unfold from history, and how the logic of science can set off a chain of impressions that in the end accomplish what the liberal arts are designed to do: make the world seem like a streaming, ether-like, continuous whole, instead of something knowable only by the academy’s divisions of investigation.

She called Ralph Waldo Emerson, a man of both poetry and natural science, “the presiding spirit of this gathering.”

There were other Harvard Phi Beta Kappa traditions to satisfy during the 90-minute ceremony, which three times was joyfully interrupted by the Commencement Choir.

First came the awarding of the Alpha Iota Prizes for Excellence in Teaching. Recognized were Philip Fisher, the Felice Crowl Reid Professor of English, who drew praise for his “close readings and wide-angle reflections on life”; Alison Simmons, the Samuel H. Wolcott Professor of Philosophy and Harvard College Professor, who “can make a class of 70 feel like a seminar,” the citation read; and biologist Thomas Torello, assistant director of undergraduate studies in the life sciences, “a caring mentor” praised for his senior-thesis workshop.

The awards are given each year to members of the Faculty of Arts and Sciences, with the nominations coming from undergraduate members of Harvard’s Phi Beta Kappa chapter.

In another tradition, honorary members were named to the chapter, starting with Daniel Aaron, Ph.D. ’43, the Victor S. Thomas Professor of English and American Literature Emeritus. He arrived at Harvard as a graduate student in 1933 and still goes to his office in the Barker Center every day, lately to husband his latest book, which is due out in a few months.