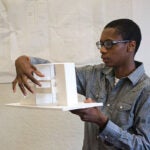 There are about 500,000 centenarians worldwide, but only one is a Harvard professor who first arrived on campus in 1933, who used to correct undergraduate John F. Kennedy’s English papers, and who earned the University’s first Ph.D. in American Civilization.

Daniel Aaron, the Victor S. Thomas Professor of English and American Literature Emeritus, celebrates his 100th birthday tomorrow (Aug. 4). When he was born in Chicago in 1912, bubbles had barely stopped rising from the sunken Titanic. A first-class airplane managed a top speed of 70 mph and cruised on fabric wings. Cars had names like Metz, Flanders, Acme, Speedwell, and Mighty Michigan.

When Aaron arrived at Harvard for graduate school, armed with a bachelor’s degree from the University of Michigan, the paint was still fresh on Memorial Church, polo was a varsity sport, and one professor, Samuel Eliot Morison, still rode to school on horseback. The old Harvard was still evident, Aaron said in a 2010 interview. “You could feel it and see it.”

After graduate studies, Aaron taught for three decades at Smith College before returning to Harvard to teach from 1971 to 1983. Along the way, he helped to found the Library of America. He acquired friendships in the heart of America’s 20th century literary world (“You met people,” he said), and he continued writing in a set of hardbound journals he began keeping in 1929.

These days, Aaron still goes to his office in Barker Center every weekday, and often on weekends. His memoir, “The Americanist,” appeared in 2007. He is finishing a new manuscript, based on his journals. In his office, concessions to modernity are few, unless you count an IBM Selectric typewriter of the kind that first appeared in 1961. Earlier this week, a friend arrived carrying an iPhone. Aaron asked, “What’s that?” He conceded that his interests, values, and scholarship are largely from the 19th century — and that’s OK.

Soon the gathering in his office grew to five visitors. One was a Harvard professor nervous about his coming 35th birthday. Aaron was sympathetic. “When I turned 30, I thought it was the end of the world,” he said. “I didn’t want to see anybody.”

Conversation also touched on early telephones, black-and-white films of the ’30s, the Internet, and the coming age of digital scholarship. Access to knowledge so broad in devices so little reminded Aaron of the cautionary line from Christopher Marlowe’s “The Jew of Malta”: “Infinite riches in a little room.”

The professor and his visitors also puzzled over the Greek roots of the word “cynosure,” a person or object that attracts attention, or — starlike — serves as a guide. The youngest visitor looked up the answer on an iPhone.

On his hundredth birthday, the modest Aaron still has no intention of being a person who attracts attention. Today (Aug. 3), he will attend a Society of Fellows luncheon. There might be a cake. And on his birthday, Aaron will have a quiet dinner with his family — after he goes to work, of course.