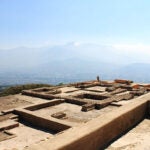 North Korea is a harsh and isolated dictatorship, but Jieun Baek is not about to let that minor detail get in her way.

“My obsession, my life passion, is with this idea of trying to bombard this country with information about the outside world,” said Baek. “To get people to not only think about what’s outside their reality, but also trying to build mental capacity to act on that. I’m not trying to start a revolution, because the regime has no qualms about wiping … people out, but trying to inform that citizenry is something I’m really interested in.”

Baek’s parents were born in South Korea, but her interest in the North began when she arrived at Harvard College. “It was November of freshman year, and some cute guy asked me to come to a talk at Kirkland House. I didn’t even know what Kirkland House was at that time. I went, and speaking was Kang Chol-Hwan, who was sentenced to a prison camp [in North Korea] at the age 9 for 10 years. He was talking about how he was being tortured and all these awful things, and it was just a shock to my system,” she said.

Following a gap year working at the U.S. State Department, Baek graduated in 2010 and took a job in her native California with Google, managing ad sales and researching projects to help North Korean defectors access information.

Despite the job’s enviable prestige, Baek, 27, always intended to return Cambridge and the Harvard Kennedy School (HKS), where she has earned a master’s degree in public policy.

“There are lots of amazing kids at Harvard, obviously, but she’s a very amazing one,” said Graham Allison, director of the Belfer Center for Science and International Affairs at HKS. “She is determined that North Korea is going to be free. She’s determined that this is going to happen sooner rather than later, and if you tell her anything she could do to make that more likely, I’d say watch out, she’ll probably do it.”

Baek started “Inalienable,” a blog that provides a conduit for North Korean defectors to freely tell their remarkable and often heartbreaking stories, and she co-produced “Divided Families,” a documentary about families torn apart by the icy relations between North Korea and most of the world.

“Trying to instill human dignity on a one-to-one basis, it’s a very powerful experience. Hearing people’s individual stories … the shocking, haunted element of every story, has not worn off,” she said.

Last August, Baek led a group of Harvard students on an eight-day trip to North Korea. Despite the worries of family and friends, she forged ahead, the first of her relatives to visit since the country formally split.

“It was very emotional experience for my relatives, especially for my grandfathers who were from North Korea and separated from their families, [and] haven’t seen their families since 1948,” said Baek.

Baek is mulling a Belfer Center fellowship offer to work after graduation with Allison; Gary Samore, the center’s executive director of research; and Stephen Bosworth, former U.S. ambassador to South Korea. She plans to write a book about her experiences talking to dissidents and the ongoing efforts to pierce North Korea’s veil of secrecy.

Reflecting on her six years at Harvard, Baek said she has been regularly inspired by her fellow students. “One thing I think about often that I’m grateful to this giant institution for is that … the realm of possibilities for me has exploded exponentially. ‘I can’t’ has been stripped from my vocabulary,” she said.

“I see individual people around me doing work that is pretty impossible to do, but they’re just doing it on a daily basis. And that kind of thinking has really penetrated my psyche. It’s been a hell of a ride.”