A celebration of ideas 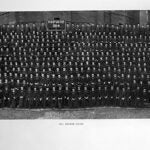 Radcliffe Institute turns 15, with 900 of its closest friends

It’s not every day that you get to attend a birthday party with more than 900 of your best friends.

For Radcliffe Day on Friday, more than 900 alumnae and alumni, current students, fellows, faculty, and University leaders will celebrate a milestone anniversary: 15 years of the Radcliffe Institute for Advanced Study, founded in 1999, and 135 years of Radcliffe, founded as the Harvard Annex in 1879.

“On Radcliffe Day, we reflect on the past, savor the present, and imagine the future. We celebrate what connects them all: the pursuit of knowledge, a dedication to excellence, and a spirit of inquiry,” said Dean Lizabeth Cohen RI ’02.

A highlight will be when Cohen awards the Radcliffe Medal to Harvard President Drew Faust, whose combination of scholarship of 19th-century America and leadership of Radcliffe and Harvard establish her as “a historian who is making history.”

Faust, the first female president of Harvard and the Lincoln Professor of History, was the founding dean of the institute. Her tenure built on the rich traditions and important legacies of Radcliffe College and the Bunting Institute to establish a vibrant scholarly, scientific, and artistic community.

Radcliffe is a leading institute for advanced study where original thinkers engage in work across the arts, humanities, sciences, and social sciences through three areas: an esteemed and highly competitive fellowship program; the renowned Schlesinger Library on the History of Women in America, whose research collections are used by students and scholars around the world; and an Academic Ventures program that creates unique opportunities for Harvard faculty members to develop areas of inquiry and collaboration. All three programs offer dynamic events — conferences, symposia, lectures, exhibitions, and concerts — that are free, open to the public, and shared online.

Faust shaped the institute, but she has said that she was shaped by her tenure leading Radcliffe before she became president of Harvard in 2007. Speaking at the launch of the Radcliffe Campaign, “Invest in Ideas,” she said, “Many of the fundamental commitments I’ve made as president are lessons that I learned here at the Radcliffe Institute. Even though I didn’t graduate from Radcliffe, I got an education at Radcliffe.”

The lunch in Radcliffe Yard will include remarks by Faust, Cohen, and former Harvard President Neil Rudenstine, who recruited Faust to Harvard. Panel discussions will draw on the institute’s broad range of intellectual commitments and its diverse community, with participants coming from College graduates, institute fellows, and the Harvard faculty.

The morning panel, a tribute to Faust’s scholarly accomplishments and personal values, is called “From Civil War to Civil Rights: The Unending Battle to Vote,” which will explore why and how the United States has long struggled over which of its citizens can vote.

The second panel, “Gender and the Business of Fiction,” will engage writers, publishers, and critics in a discussion about who reads, who writes, who reviews, and what counts as literature.

In the third panel, “What is Life? The Science and Ethics of Making New Life in the Laboratory,” scientists and ethicists will explore how recent discoveries in the biological sciences raise new ethical questions.

Consistent with many of Radcliffe’s programs, these panels are being webcast live and will be available online in June: www.radcliffe.harvard.edu/.