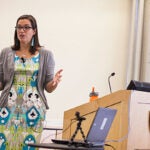 A capstone to learning

When William J. Cromie was 15, the call of the sea became too strong to resist. So he ran away from home to work on a freighter.

That impulsive act began a lifetime quest for new places, people, and ideas. As a young man, it meant visiting the world’s oceans, followed by a Columbia University geology degree. It meant a 1,450-mile traverse of Antarctica’s Ross Ice Shelf and having a peak in Antarctica’s Bush Mountains named for him. It meant spending months exploring the Arctic Ocean seafloor while drifting toward the North Pole in a lab built on a melting ice floe.

The lifetime quest also meant eventually swapping the world of geology for that of journalism, publishing articles in magazines and newspapers across the United States, Canada, and Europe before taking an MIT Knight Science Journalism Fellowship in the late 1980s. After that, he came to Harvard, in 1989. He spent 18 years writing about the latest findings from the world’s top minds examining life, the Earth, and the universe for thousands of readers of the Harvard Gazette.

Famous among his colleagues for both his lucid explanatory prose and his hatred of meetings, he told those attending his farewell party that his years at Harvard were like a dream come true, both because of the people he met and because he was able to learn and write regularly about the latest science findings.

Edward O. Wilson, Pellegrino University Professor Emeritus, worked with Cromie on several articles over the years and called him “a brilliant journalist and a credit to Harvard’s media.”

Longtime Gazette editor Terry Murphy said that Cromie had a unique gift for getting Harvard’s top researchers to explain their work in a way that everyone could appreciate and understand.

“They respected and trusted Bill to get it right, and he did,” Murphy said. “The late Judah Folkman, one of Harvard’s premier cancer researchers, had so much respect for Bill that he kept trying to coax him from the Gazette so he could work in Folkman’s lab.

“Bill left the Gazette in 2007 and I still get requests for permission to reprint his work,” Murphy added. “He’s remembered by many, not just those who worked with him.”

Steve Cromie described growing up with a devoted though sometimes no-nonsense father who exhibited uncommon generosity to those less well off. He never missed one of Steve’s hockey games. The Cromie home was welcoming and open, often hosting friends and family from out of town.

Family friends spoke of Cromie’s great energy and his balanced perspective on life.

Michael Herbert, who grew up with Steve Cromie and who remained a family friend, said Steve’s father would sometimes pull them both aside when they had gotten into trouble and in a matter-of-fact way help them to see the consequences of their actions. He described the approach as giving them some leeway, but keeping them on the right road. He said it’s one he employs today with his own children and sometimes, as a captain in the Pleasant View, Ill., Fire Department, with those under his command.

“They were probably two of my favorite people in the world,” Herbert said of Cromie and Alicia. “Steve’s dad was one of those guys who knew how to give me a nudge and get me back on the right track. … He was a great man and we’ll miss him terribly.”

Jeff Marshall, who became a close friend of Steve’s while in college at Iowa State University, said the Cromies treated him like a second son and Steve’s dad was like a second father to him, who he would call occasionally and go out to dinner with. He described Cromie as humble and part of a generation that valued hard work.

“He was a great man. He did it the right way, he and his wife together. They were the perfect team,” Marshall said.

William Cromie was born in 1930 and grew up in Queens, N.Y. He left for the sea after World War II and worked as a seaman, cook, and engineer for five years before he was idled by a shipping strike in 1950. He enrolled at Columbia University in a program for talented people who’d never finished high school. Six years later, he became the first person to graduate with a Columbia geology degree without having attended high school.

He then worked as a uranium prospector in Colorado, and in the gold and copper mines of Montana. His experience with explosives gave him a leg up to work with a geological team in Antarctica during 1957-58, the International Geophysical Year.

After a year in Antarctica, he worked in the Indian Ocean and the Red Sea, serving as oceanographer and first officer of the Vema, a three-masted schooner operated by Columbia. In 1960, he became a fellow at a science writing program at Columbia and began his journalism career.

A gathering in remembrance of William J. Cromie will be held May 2 at 6 p.m. at The Burren in Davis Square, Somerville, Mass. All are welcome to attend.