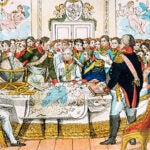 Lessons, warnings in a centuries-old peace

Greenblatt speaks on the spectacle, and consolations, of tragedy at the Cambridge Public Library

Before a standing-room-only audience of 220 at the Cambridge Public Library, Stephen Greenblatt, the John Cogan University Professor of the Humanities at Harvard, spoke about the powerful attraction of tragedy, both when we are safely removed from it, and when we are suddenly and irrevocably thrust into it.

Greenblatt opened the March 25 talk with an excerpt from “On the Nature of Things,” penned by Lucretius in 50 B.C. The poem is at the heart of Greenblatt’s book, “The Swerve: How the World Became Modern,” which won both a National Book Award and a Pulitzer Prize.

Lucretius observed how “comforting” it was to witness “troubles [from which] you yourself are exempt,” such as “mighty clashes of warriors who battle on the plains, when you have no share in the danger.”

The observation, Greenblatt said, “hit the full force of weirdness” of a question for the ages: Why do people take comfort in tragic spectacles? Part of the answer, he suggested, lies in the sense of removal and relative safety of “looking out” at such an event. “To understand that you’re not part of that [event] — you’re not on a ship that’s foundering, but looking out from a comfort zone,” he said, is both reassuring and pleasurable.

Greenblatt’s talk represented one of the many ways the Cambridge Public Library has collaborated with Harvard on programming and public talks.

“Harvard has enjoyed a longstanding relationship with the Cambridge Public Library system,” said Kevin Casey, associate vice president for public affairs and communications. “And we will continue to foster this connection as a way to share some of our faculty and student expertise and resources into the library, and by extension, the community.”

Greenblatt pointed out that we also reach for depictions of tragedy when we find ourselves in unexpected turmoil.

Drawing from “Richard II,” the Shakespeare scholar and author of “Will in the World” quoted passages from the third act of the play, when the king realizes that he will likely soon be deposed, and then assassinated. Rather than shutting himself away, the monarch calls his men to join him: “For God’s sake, let us sit upon the ground, and tell sad stories of the death of kings.”

For Richard, Greenblatt said, that moment “illuminates the dance of death,” a pivotal shift in the spectacle of tragedy.

“In the 1,600 years between Lucretius and Shakespeare, continuing through our own time, we have been forced to take in a lesson,” Greenblatt said — namely that “there are no safe places to stand in a disaster. We are all on a ship that is foundering.”

The way we deal with the anxiety and tenuous nature of modern life, Greenblatt said, is through sharing stories — even, and perhaps especially, when the end is upon us.

When things are spinning out of control, Greenblatt said, telling stories makes us feel “as if we have some shaping power that will help us get through what we must go through,” and “may even last after we’re gone.”

Born in Boston and raised in Cambridge, the author said he was delighted to speak at the event.

“I love the Cambridge Public Library,” he said. “I have a 12-year-old who I’ve brought here for years, and he has many books checked out as we speak … it’s a magnificent place, and I just adore it.”

“How wonderful that the ‘people’s university,’ the Cambridge Public Library, enjoys such a collaborative relationship with our neighbor, Harvard University, allowing us to offer outstanding scholars and writers such as Stephen Greenblatt to the Cambridge community,” said Susan Flannery, the city’s director of libraries. “It was evident from the enthusiastic attendance and the lively Q-and-A that residents of all ages and backgrounds have a desire to engage in rich intellectual discourse with each other.”