‘The Temptation of Despair’ 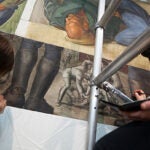 It is one thing to survive a war — a consequence of luck, perhaps, or skill.

It is another thing to survive the aftermath of a war — an interval marked by death, ruin, guilt, the irony of survival itself, and the hubris of the triumphant that follows an uneasy peace.

War’s aftermath, in this case the late 1940s in Germany, is the subject of a new book by Werner Sollors, “The Temptation of Despair,” out this month under the Belknap Press imprint of Harvard University Press. The author, who was a child in the ruins of the Germany he describes, spoke Wednesday night in Sever Hall during a book talk sponsored by the Mahindra Humanities Center at Harvard.

Moderator Homi K. Bhabha, director of the center, was happy to see “a wonderfully packed room” and to hear Sollors discuss a book in which “every page is also a record of survival.” The event served as a soft launch of a new Mahindra initiative, said Bhabha, a three-year seminar on violence, scheduled to begin in the fall with the first-year theme of war.

Sollors was not quite 2 years old at the end of World War II, and a resident of a suburb near flattened, smoking Frankfurt. He had once considered writing a memoir, but decided quickly to keep his own story in the background. Personal glimpses in “Temptation” remain spare. Instead, Sollors, the Henry B. and Anne M. Cabot Professor of English Literature, decided on a format that would evoke what he called the “raw” feelings just after the war, and the atmosphere of a ruined nation: diaries, fiction, journalism, photographs, and movies.

Much of what he uncovered Sollors had never seen before. Confronting the artifacts and texts and images of a lost era, he said, “has been quite a journey for me.”

The cover photo of the book, by Tony Vaccaro, conveys the puzzle. In May 1947, an artist sits on a street in Frankfurt, sketching the destruction in front of him. The photo asks: How do we cope? How will humanity grasp, and remember, a wasteland?

Sollors began with his account of what James Stern saw in the Germany of 1945 as a member of the U.S. Strategic Bombing Survey. His mission, as a critic and short-story writer, was to assess the psychological damage to the German people. (Stern’s traveling companion, and would-be co-author, was the poet W.H. Auden.)

Metaphors turned out to be plentiful, said Sollors, though writerly observers tried to sidestep clichés. Collapsed cityscapes by turns became graveyards, tumultuous seas, wrecked steamships, earthquakes, crushed anthills, stage sets, and landscapes of skulls and bones. It was all, Stern wrote, “the permanent memorial of one short nightmare.”

Novelist Gertrude Stein visited, said Sollors, whose book shows her in several photographs. She resisted metaphors of ruin, he said, but occasionally gave into stunning visuals. “Hers was a whole spread-out city,” Stein wrote, “without a roof.”

Stern resisted the questionnaires he was required to have people fill out, preferring instead longer conversations with the defeated Germans. His 1947 book bears the title “The Hidden Damage,” a tale of spiritual suffering.

The witnesses Sollors calls up are often artists, and many are photographers, like Margaret Bourke-White, who thought aerial shots captured the damage best. Other masters of the camera lens, like Vaccaro, stayed on the ground, in pursuit of what Sollors called an aesthetic of “ruin photography.” A postman goes on his rounds among the destruction of Frankfurt in one Fred Kochmann image.

Irony could came cheap, said Sollors, as in a photo of a movie marquee for “The Best Years of Our Lives” on a wrecked German street. The same was true of pictures of children at play in ruins. A 1950 photo by Paul Rötger shows children playing a ring game in Frankfurt, in front of a wrecked cathedral and city hall. The shells of buildings became for his generation “mysterious caves and enchanted castles,” said Sollors.

His book, full of images of despair and written accounts of horror, still tries to draw out such glimmers of hope, and more. The last chapter, “Coda,” is subtitled “Comic Relief.” The postwar period saw a religious revival in a search for relief, said Sollors, but comedy was “another important antidote.”

Comedy sometimes took the form of ephemeral gags, including the oft-photographed habit of postwar American soldiers of snapping Hitler salutes in front of Nazi monuments. In Hitler’s Munich apartment, photographer David Scherman took a frame of a G.I. lounging on Hitler’s bed while reading “Mein Kampf.”

Also discussing the topic after Sollors’ presentation were Janet Halley, the Royall Professor of Law at Harvard Law School (who also has a doctorate in English literature) and Henry Rosovsky, professor of economics emeritus. He was dean of the Faculty of Arts and Sciences from 1973-’91 and as a teenage American soldier served in Germany after the war.

Halley discussed the horrors of rape in the war’s aftermath. The practice was, among other things, machinery for revenge, she said, a reactive human impulse that achieves nothing. As Aeschylus wrote, said Halley, even after revenge-taking, “the sum of terror remains the same.”

In his book, Sollors drew on the most famous diary to emerge from the war, “A Woman in Berlin,” published in 1954 with a translation by Stern. An estimated 2 million German women were raped as the Red Army advanced on Berlin.

Revenge had another outlet, said Halley, in some of the journalism that attempted to deal with the horrors of concentration camps. Halley chose a passage from an article written by Martha Gellhorn after she toured the Dachau camp and witnessed the bodies of dead inmates (emaciated) and executed guards (fat). “And for the first time anywhere,” Gellhorn wrote, “one could look at a dead man with gladness.”

That same seething cloud was in the air of the postwar Germany he served in as a soldier, said Rosovsky, who responded to the Sollors book with tales of his own. “It made me think of events nearly 70 years ago,” he said. “It created an avalanche of memories.”

One group not examined in the book, said Rosovsky, was the European refugees in the postwar American Army, who were “85 percent Jewish” and little liked, though they were tolerated because they knew vital languages.

His rush of memories included a Nazi officer who praised his German accent but added that he had “the vocabulary of a 10-year-old”; the “tally-ho raids” that extracted the guilty from the towns; and an attempt by the Germans to stage their traditional passion play in Oberammergau. There was only one problem, Rosovsky said. “The only member [of the cast] who had not been a Nazi was Judas.”

Then there was the desperation. “The Germans were starving,” said Rosovsky. “Any woman was available for a half a pack of cigarettes.” (He added, on a personal note, that he did not “fraternize” because, the book made him remember, he was shy.)

Most sharply, Rosovsky remembered his aloofness with Germans and “the moral arrogance in my behavior,” a form of hubris among victors that Sollors examines in his book. Everyone asked, how could ordinary Germans have stood by as evil rushed in and claimed the lives of millions?

In turn, the experience of remembering led Rosovsky to reflect on the McCarthy era of U.S. communist-baiting that followed by a few years.  Who stood up then, he asked? Among Americans — who would not have faced death for their opinions — “moral courage was not very evident.”