The politics of money 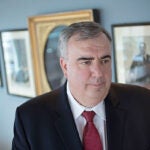 In Q&A, law professor says court ruling against campaign-finance limits is one more cut in a slow death

The U.S. Supreme Court has struck down aggregate campaign contribution limits, in a ruling that frees individuals to donate to as many candidates as they wish. The decision is similar to a 2010 ruling in the Citizens United case, which allowed unlimited political spending by corporations, associations, and labor unions. Analysts say that Wednesday’s ruling will increase the role that money plays in political campaigns. The 5-4 decision was split along partisan lines, with the conservative members in the majority.

Harvard Law School’s Noah Feldman, Bemis Professor of International Law, spoke with the Gazette about the ruling, and what it means for elections and for the future of campaign-finance reform.

GAZETTE: What exactly does this case address, and what were the arguments on either side of the decision?

FELDMAN: The case is about whether limits created by Congress in the McCain-Feingold Act — on the aggregate number of candidates to which one individual may contribute the maximum donation — is constitutional or not. And the court struck down the law with a plurality of four justices, with Chief Justice [John] Roberts writing for them, saying that it was unconstitutional. And they got a fifth vote from Justice [Clarence] Thomas, who would have gone even further than the majority and not only struck down these laws, but also the general limit on donations to any one candidate.

The rationale of the majority was that under the First Amendment, the right to donate to candidates can only be limited if the purpose of the limitation is to avoid the appearance of quid pro quo corruption. And they believed that making donations to an unlimited number of candidates doesn’t create that impression. They were bolstered in this by the fact that after the Citizens United decision and the creation of the super PAC [political action committee], the court essentially held that even if your super PAC gives millions of dollars to candidates all over the country, it doesn’t give rise to the appearance of quid pro quo corruption. So if that’s the case, then naturally this wouldn’t give that appearance either.

The dissenters, with Justice [Stephen] Breyer writing the opinion, disagreed sharply, and they said that in fact the right way to think about it is not whether there’s the appearance of a bribe, but rather whether, overall, the system is distorted by the attenuation of the connection between what Justice Breyer called the “communicative chain” between the voter and the elected official. And he offered a broader theory of the justification of campaign-finance laws, but he only had four votes, so he lost.

GAZETTE: How does this decision compare in impact with the ruling in the Citizens United case?

FELDMAN: It has a smaller practical impact and probably a comparably large symbolic impact, the smaller practical impact because, after all, a billionaire could already donate $93 million to a super PAC and spend it over the course of a campaign all over the place, and this enables him to do that actually on a much smaller scale. Even if you made the maximum donation for every single candidate running for the U.S. Congress, you still wouldn’t come anywhere near that amount of money. So in practical terms it doesn’t make a huge difference. In symbolic terms, it’s actually pretty major because this was one of the regulations that formally said that direct donations to candidates could be limited in a way that would prevent, say, one rich person giving the maximum to every person in Congress, which is totally possible now. So from the standpoint of thinking that you, the individual citizen, could actually have some relationship with your candidate, the odds of that are massively attenuated when all the richest people now have the right, if they want, to give donations not just to their favorite handful of candidates, but to all the candidates that they want nationally. So it’s symbolically significant.

GAZETTE: Who are the people affected most by this ruling?

FELDMAN: There are two kinds of effects. In practical terms, it’s only anybody rich enough to max out more than 14 people. You have to be pretty rich to do that. But it also affects everybody who cares or thinks that the link between finance and election should be attenuated. If you think that we have too much money in our campaigns, then this affects you.

GAZETTE: What does this mean for the future of campaign-finance reform?

FELDMAN: It means that we’ve taken one more step in the direction of what will eventually be the complete constitutional abolition of all prohibitions on spending or contributions. I wrote a column about this where it says that campaign-finance reform is dying the death of a thousand cuts, and this is just another cut along the way to what will eventually be its total death. And so that’s where we’re headed. The other thing that’s important to understand is that 80 percent of the public says there’s too much money in politics and it should be limited. And Congress, proceeding to get bipartisan effort, has actually repeatedly passed campaign-finance limitation. And it’s the Supreme Court that is striking it down. This is a classic case of judicial activism, and it’s justified on free-speech grounds. So if you buy the theory that your money in an election is free speech, then you should like it, because free speech is being protected against Congress. But if you think it’s a misunderstanding of the First Amendment, then it’s an extreme example of public will being thwarted by justices.

GAZETTE: Is this ruling a reversal of Buckley v. Valeo, the 1976 decision in which money was equated to a form of speech?

FELDMAN: Actually, the justices argued about that. It doesn’t reverse the important part of Buckley that upheld limits on individual donations to individual candidates, but Buckley did uphold something quite similar to this, which was an aggregate limit. And the majority said that because that was technically a different law — though it was structured the exact same way — they weren’t overruling that part of Buckley. And the dissent said, “Oh, you’re kidding, you’ve overruled that part of Buckley.”

GAZETTE: If the court continues ruling in this direction, what is the outcome likely to be for American politics?

FELDMAN: We’re entering a fuller and fuller realization of the ideal, that some hold, that there should be unlimited spending in campaigns. According to that view, it’s always been a charade to regulate campaign finance. If you regulate it in one space, it will come out in another. That view thinks it’s hopeless to limit campaign finance, and not only hopeless but unprincipled and unconstitutional. So that view is winning. And it’s winning because of five votes, not because of the support of the general public. So we are fully entering that world, and it will be a major experiment just letting it all hang out, allowing a system that is openly and overtly shaped overwhelmingly by money. And then the long-term question is: Will that substantially erode the realities of our democratic practices? A lot of people will say it already has. And another question is: Will it erode public confidence in the democratic process? Because there are two parts to democracy. One is the actual functioning of the institutions; the other is the perception of the legitimacy of those institutions. And even if the former were not affected — which I think is improbable, but even if it weren’t — the latter could be very strongly affected.