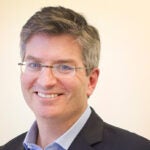 At Memorial Church, runners, students, others pay respects on anniversary of Boston bombing

Rain and powerful winds pounded the Memorial Church this afternoon as people streamed in and out of its pews to remember and pay respect to those saddened and hurt by the Boston Marathon bombings exactly one year earlier.

The weather was perfect that day, Patrick Rooney ’14 remembered.

He had run the 2013 Boston Marathon as part of the Harvard College Marathon Challenge. Rooney had finished the race and was five blocks away when the first bomb detonated. Tuesday, he sat inside Memorial Church “to reflect on being here today when so many couldn’t.”

“There was just so much confusion,” he said. “I just remember afterward the very big outpouring of community support, the love and care from Harvard and from Lowell House.”

None of his fellow Harvard runners was hurt.

Madeline Cooper ’16 had finished the race with her sister. Cooper was raised in Ashland, near the marathon’s starting point. “I grew up watching the marathon,” she recalled. “It was always a very big part of my life and my family’s life.”

She was two blocks away when the bombs exploded on Boylston Street. “I just remember thinking, ‘You’ve run this far, it’s a great personal accomplishment,’ and then hearing this boom and thinking, ‘Oh, they have fireworks!’ and then I saw the smoke.” Her family was safe.

Cooper donned her marathon jacket, and she’s running again this year. “This is one of the most powerful things I’ve been a part of. There are a lot of mixed feelings. There’s excitement to do it, and the satisfaction of finishing … but I don’t know that I’m emotionally prepared for it.”

To train, she has been running from her doorstep in Ashland to Harvard. “I see the Boston Marathon as a journey for me. I get to run from my home to where I am now, and I’ll pass the hospital I was born in.”

For international student Elizabeth Felts ’14, the marathon bombings were a moment of awakening.

“When it happened, I realized that in my time here, I’ve spent a lot of time working in the community, and I grasped how connected I was to that community, how Boston is my home,” said the native of England.

It was her family back home who originally alerted her to what was going on.

“I was in a lab that day,” said Felts. “But I knew a lot of people running, and if I didn’t have lab, I would’ve been there. I felt so helpless, I almost wished I’d been there to help … and so much dread knowing how many people I knew that could’ve been affected.”

A short while later, Felts’ family also notified her that the apartment they’d rented while visiting had been next door to the house where the Tsarnaev brothers lived. “That really freaked them out,” she recalled.

As the manhunt went on for the bombers, Felts spent the day of the lockdown with others in the Dunster House dining hall. “Everyone was a little bit dazed, no one knew what we could do. We were still processing,” she said.

Felts said she still felt uneasy when the shelter-in-place order was lifted later that night. “They were still out there,” she said. That night, the shootout in Watertown ended in the death of Tamerlan and the eventual capture of Dzhohkar Tsarnaev.

“It took me weeks to feel relaxed again,” she said through tears. “When I think of my Harvard career, this really stands out. It really shaped me. Being an international student, I have no real roots here in America, except for Boston. Even when I move away, Boston will always be home.”

Outside the Memorial Church, remembrance boards emblazoned with messages from the Harvard community weathered the rain, while tourists — mostly international — gathered to read and photograph them.

At 2:49 p.m., the church bells rang to mark the anniversary of the day that stole five lives, wounded hundreds, and forever changed Boston.

“It’s a very sad day,” said Nicholas Hall of England, passing through the Yard with his wife and daughter, “a sad day for Boston and a sad day for America.”