Paulus is among Time 100 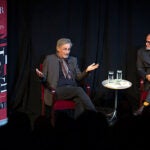 Time magazine has named American Repertory Theater (A.R.T.) Artistic Director Diane Paulus to the 2014 Time 100, its list of the 100 most influential people in the world.

The annual list, now in its 11th year, recognizes the activism, innovation, and achievement of the world’s most influential individuals. Time has called the list a collection of “people who are using their ideas, their visions, their actions to transform the world and have an effect on a multitude of people.”

“I am deeply honored by this recognition, which for me is a tribute to the incredible collaboration I have enjoyed over the last several years with the many artists, audiences, producers, and advocates of the arts that I have been lucky enough to work with, including the extraordinary team at the American Repertory Theater and Harvard University,” said Paulus. “It has always been my goal for theater to have an impact on the world we live in, as I know it can and should, and to be represented on this list is a thrilling sign that we are on our way.”

Last year Paulus won the Tony award for best direction of a musical for her restaging of the 1970s show “Pippin,” originally by Stephen Schwartz and Roger O. Hirson. The revival, which the A.R.T. premiered and which received 10 Tony nominations, earned three other top prizes: best revival of a musical, best performance by a featured actress in a musical, and best performance by a lead actress in a musical.

It was the first directorial Tony win for Paulus, who received a best director nomination in 2012 for her production of “The Gershwins’ Porgy and Bess,” which won that year’s award for best revival of a musical. She also won one in 2009 for “Hair.”

The A.R.T. collaborates with artists around the world to develop and create work in new ways. It is currently engaged in a number of multiyear efforts, including the Civil War Project, an initiative that will culminate in the staging of new work in the 2014-15 season. Under Paulus’s leadership, the A.R.T.’s club theater, Oberon, has become an incubator for local and emerging artists and has attracted national attention for its innovative programming and business models.

As the professional theater on the campus of Harvard University, the A.R.T. catalyzes discourse, interdisciplinary collaboration, and creative exchange among a wide range of academic departments, institutions, students, and faculty members, acting as a conduit between its community of artists and the University. A.R.T. artists also teach undergraduate courses in directing, dramatic literature, acting, voice, design, and dramaturgy. The A.R.T. Institute for Advanced Theater Training, which is run in partnership with the Moscow Art Theatre School, offers graduate-level training in acting, dramaturgy, and voice.

Dedicated to making great theater accessible, the A.R.T. actively engages more than 5,000 community members and local students a year in project-based partnerships, workshops, conversations with artists, and other enrichment activities both at the theater and across Greater Boston. The A.R.T. is dedicated to producing world-class performances in which the audience is central to the theatrical experience.

Time’s list of its 100 most influential people will be in its May 1 issue, which appears on newsstands Friday.