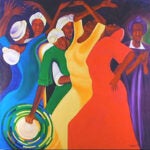 Megan Marshall ’77 was awarded a Pulitzer Prize for “Margaret Fuller: A New American Life” (Houghton Mifflin Harcourt 2013), her richly detailed biography of the 19th-century author, journalist, and women’s rights advocate who perished in a shipwreck off New York’s Fire Island.

Her book “The Peabody Sisters” was a Pulitzer finalist in 2006.

Marshall, 59, was a 2006-07 fellow at the Radcliffe Institute for Advanced Study. At Harvard College, she studied American literature and poetry, graduating Phi Beta Kappa and earning the Harvard Monthly Prize, an award given to the most promising student writer.

She currently teaches nonfiction writing and historical research at Emerson College in Boston.

For more about the author, read Radcliffe Magazine’s interview with Marshall.