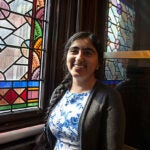 Earns championship after 11-10 win at Yale

NEW HAVEN, Conn. – The No. 16 Harvard men’s lacrosse team did what no other Crimson team had done in 24 years on Saturday, as it clinched the program’s first Ivy League championship since 1990 with an 11-10 win at No. 13 Yale.

Harvard will share the title with Cornell after the Big Red defeated Princeton Saturday, 12-10, to match the Crimson’s 5-1 conference record. By virtue of its victory over Cornell, however, the Crimson has earned the right to host next weekend’s Ivy League Tournament which will begin May 2 at Harvard Stadium. The Big Red and Penn will meet in the first semifinal at 5 p.m., with a rematch between Harvard and Yale set for 8 p.m. Both games will be broadcast live on ESPN3.

The winner of each game will meet May 4 at noon, live on ESPNU.