For writers and students, a break from solitude 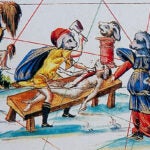 A crowd was waiting when husband-and-wife fiction writers Paul Yoon and Laura van den Berg arrived at the Barker Center last month to discuss the pleasures, choices, and sacrifices that come with writing.

Their appearance was sponsored by Writers in the Parlor, a series founded and curated by Bret Anthony Johnston, director of creative writing in Harvard’s English Department. Since its launch in 2007, the series has helped to make the writing life a little less lonely for both visitors and students, said Johnston, the author of the story collection “Corpus Christi.”

“We wanted to invite extraordinary writers to participate in conversations with our student writers,” said Johnston. “The goal was for the conversations to be intimate and wide-ranging, exploring contemporary and classic literature, the author’s work and experience, the students’ writing and aspirations, anything and everything that comes with a life in letters.”

Yoon, who has published two books, is the Roger F. Murray Chair of Creative Writing at Phillips Academy in Andover, where he and van den Berg live. Van den Berg, who also has two books under her belt, commutes to Boston to teach in Emerson College’s M.F.A. program.

“Both Paul and I had a terrific time at Writers in the Parlor. The atmosphere was energetic and friendly, and you certainly can’t ask for a better moderator than Bret Anthony Johnston,” said van den Berg.

“The questions from the attendees were so insightful and interesting — I always love it when the conversation that emerges during a Q&A encourages me to think of some aspect of fiction, or of the writing life, in a slightly new light, and that definitely happened at Writers in the Parlor. It was an honor to be there, and we both had a lot of fun.”

Next month, Random House will publish Johnston’s debut novel, “Remember Me Like This,” and he’s been instrumental in the planning LitFest, Harvard’s first-ever literary festival.  The three-day event starts April 29.

“You would be hard-pressed to find an institution who takes its writers more seriously,” said Johnston. “The members of the literary community here converge in the shared enterprise of making literary art, the process of it, whereas other institutions are more invested in the product.  I’m really proud that Writers in the Parlor fits so seamlessly, and has been so warmly embraced, by such a community, and I believe it’s made a unique and considerable contribution to the ongoing conversation.”

The opportunities to bring fiction writers to campus have been more limited than those for poets, playwrights, or essayists, said Johnston, which was one of the catalysts for Writers in the Parlor. (The other was Readings in the Parlor, at which professors and students engage in a close reading of a text.)

“That said,” he noted, “we have future plans to bring a great essayist and television writer to the series. I’m in the process of scheduling those visits, and once they’re announced, people will be very excited. Those events might very well be the most popular yet.”

Already at work on his second book of stories, Johnston said he feels like a student all over again when he’s moderating a Writers in the Parlor talk.

“I’m eager to hear the writers discuss their craft, their work, and the experiences that have shaped their careers. I listen for any kind of advice that will prove useful in my own work or the work of my students, and I listen to understand that I’m not alone in this endeavor,” he said.

“Even at a place like Harvard where the literary community is so vibrant, writers can feel isolated and insecure. At Writers in the Parlor events, we’ve had winners of the Pulitzer Prize and the National Book Award, writers whose work has been turned into Oscar-nominated films, and writers with international best-sellers under their belts, and every one of them has spoken to the loneliness of the vocation. Regardless of where you are in your career, you long for company and compatriots. The series offers such a bolstering community. You feel less alone and more confident in how you’re choosing to spend your life — or at least the afternoon.”

LitFest runs from April 29 to May 1 and is free and open to the public.