Down to the details, a giant in computing history 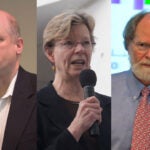 Harvard Mark I exhibit gets an upgrade

Seventy years ago, the first programmable computer in the United States began humming away in a basement lab on Harvard University’s Cambridge campus.

The Harvard Mark I was of “light weight, trim appearance,” according to a brochure published a year later, in 1945. Designed by Harvard mathematician Howard Aiken (1900-1973) and built by IBM, it was 51 feet long, 8 feet high, and weighed 10,000 pounds. The machine contained thousands of gears, switches, and control circuits, and was driven by an electric motor that turned a 50-foot shaft.

In May 1944, the Mark I was put to work with the Navy, performing basic mathematical functions to support the war effort. Among its tasks: calculating Bessel functions used in designing torpedo shapes, which led to the nickname “Bessie,” according to Juan Andres Leon, a former doctoral student in Harvard’s History of Science Department who conducted research on the machine.

Leon’s work, together with that of Laura Neuhaus, a former curatorial fellow in the Collection of Historical Scientific Instruments, and several others, is on display at the Science Center in the first update of the Mark I exhibit in 17 years. A section of the machine is also part of the show.

The Mark I had a long life by today’s standards, running for 15 years. It was broken up after being decommissioned in 1959. Large pieces went on display at the Science Center and at the Smithsonian Institution in Washington, D.C., with smaller pieces sent to other museums and to IBM.

The previous Science Center exhibition of the Mark I was completed in the mid-1990s, Leon said, and reflected its times. In the mid-1990s, personal computers ran Windows 95, hardware speed was critical, and the Web was still taking shape. As a consequence, Leon said, the importance of the Mark I’s software wasn’t emphasized, and neither, Neuhaus added, were the contributions of Grace Hopper, a Navy officer and computer scientist who was the machine’s first programmer.

An enthusiastic crowd jammed the hallway around the downsized machine — about half of the original is on display — during a ceremony last week to launch the new exhibit. Speakers including Faculty of Arts and Sciences Dean Michael D. Smith, Dean of the School of Engineering and Applied Sciences Cherry Murray, and Pellegrino University Professor Peter Galison, the faculty director of the Collection of Historical Scientific Instruments, talked about the Mark I’s significance.

The highlight of the event came when the machine was switched on, filling the Science Center’s ground floor lobby with a hum. Though the Mark I works mechanically, it wasn’t performing calculations, Neuhaus said, in part because the machine itself is incomplete and in part because the programming expertise needed to run it has faded with time.

The Harvard Mark I computer, the world’s first programmable, mechanical computer, sprang to life when officials switched it on to mark the opening of a refurbished exhibition in Harvard’s Science Center.

For Neuhaus, one of the most interesting aspects of the Mark I is the effect it has had on the language of today’s programmers. Terms such as “patch” and “loop” are often thought of as metaphorical but are actually rooted in the machine’s programming, which was accomplished through holes punched in paper tape. “Patches” were physical patches covering holes in the tape; a “loop” was formed by attaching the ends of the tape together.

“For me, the most exciting thing is tracing the etymology of language in the tech industry,” Neuhaus said. “I’m looking at the first software ever written and there’s patches on it.”

Even the term “bug” has ties to the Mark series. After tracing a problem in the Mark II to a moth that got crushed in a relay, Hopper claimed to have de-bugged the machine.

In her comments, Murray said that Harvard’s current computer scientists are carrying on a long tradition of pushing the frontiers of machine learning and artificial intelligence, with the broader aim of making a positive impact on every aspect of society.

Smith, himself a computer scientist and the Finley Professor of Engineering and Applied Sciences, said he’s amazed at how much complexity has resulted from the building blocks of simple on-off switches. Smith said there’s a lesson in the fact that Aiken, though a mathematical wizard, didn’t believe that computers would ever be widespread. Smith asked members of the audience to think about present-day echoes.

“Where is the bug in our thinking today?” Smith asked. “What are we discounting today that will be important in the next 70 years?”