Deep into a bloody history 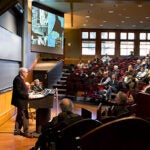 ‘The Temptation of Despair’

This story could be three words long: Watch this film.

That is: “Enemies of the People,” a lyrical and terrifying documentary of mid- to late-1970s Cambodia, whose subtitle tells the story — “A Personal Journey into the Heart of the Killing Fields.” It was screened Thursday night at the Carpenter Center at an event hosted by the Mahindra Humanities Center and by the Harvard chapter of Scholars at Risk.

Afterward, experts added context and urgency to the facts of Cambodia from 1975 to 1979. The facts: 2 million dead. The urgency: Genocide has continued to unfurl its black flag the world over.

Thet Sambath, once a journalist in his native Cambodia, is now a Scholar at Risk at Harvard. (For the film, he shared writing, directing, and producing credits with British documentarian Rob Lemkin.) His father, mother, and brother died at the hands of the Khmer Rouge. Before the film was released, in 2009, Sambath spent 10 years of evenings and weekends in pursuit of he what he calls the real — and untold — history of the killing fields. “I gave myself one hour for dinner,” he said. “Ten years was like 20 years.”

To investigate Cambodia’s killing fields of 1975-79, filmmaker Thet Sambath had to overcome his own emotions.

There are three main tropes at work in “Enemies of the People,” whose title is a reference to how the slaughtered were regarded by high leaders: dissenters who threatened to force an imagined Khmer social utopia off course.

First there was the restless travel that accompanied Sambath’s quest, which many days started with his leaving his wife and two children behind the gates of their home in Phnom Penh. Drives are filmed as brief, dreamy interludes that reveal the rural settings in which the slayings took place. Then come the rides back to the neon-lights reality of present-day Cambodia.

There is also the trope of personal presence. Sambath interviewed some of those who ordered and carried out the killings 35 years ago and more. Often he is in a modest rural house with Nuon Chea, an elderly man whose onetime bull neck and square, imposing head have shrunk into grandfatherly proportions. He was “Brother Number Two,” Pol Pot’s deputy in the time of Khmer Rouge dominance. It took Sambath a long time to even find Nuon Chea, the only surviving top perpetrator of the killing fields. To get first the thoughts and then the confessions of Brother Number Two took several more years.

Sambath also met many of the actual killers, illiterate farmers who to this day remain hiding in plain sight, living in villages sometimes a few hundred meters from the fields in which they killed — still the neighbors of families they helped decimate.

Two of them, Khoun and Soun, are remorseful and frank. For the camera, Soun — a balding man with rheumy, terrified eyes — demonstrates his killing technique on a friend who pretends to be trussed. “After I slit so many throats like this,” said Soun, who died in February, “my hand ached.”

The third trope in “Enemies” is perhaps the most unsettling. The camera leaves the full-screen faces of killers or the calm domesticity of Chea’s house to linger on brown water in rice paddies, swaying grass, stark banyan trees, and other abiding features of the natural world: sun, mud, lightning, and stony farm paths built over a grist of bones. Sitting under a tree with Sambath, Soun says: “I want to tell the truth exactly as it happened. I want you to know the exact place.” Well, this is the place, and it’s beautiful.

An old woman in a conical hat walks by, and to protect his sources Sambath jokes he is making a karaoke film. But the woman speaks up. She had returned to her farm in 1979, just after the killing stopped. Of the exposed bodies in sun-heated ditches, she says, “They were all so swollen, they made a boiling sound.”

On camera, Soun worries about death, and “how many holes in hell” he will have to go through to come back in another life as a man. But Soun concludes “I will never again see sunlight as a human being in this world. … I feel desolate.”

Meanwhile, Nuon Chea can’t recall when he first heard that villagers were being killed. “I didn’t jot it down,” he says. (Chea is in prison now, on trial for war crimes. As he did with Sambath, on the docket he blames the United States and Vietnam for the killing.)

After the screening, there came a moment of stunned silence in the packed theater. Then came rolling waves of applause.

Panel moderator Homi K. Bhabha, director of the Mahindra Center, said he was struck by a central idea in Sambath’s work — his saying “I am working for history.” Not for art, not for journalism, but to give Cambodia its true past.

That work came at a price. “I never thought I would be in the U.S.,” said Sambath in the early minutes of the panel. “The situation forced me to be here.” By that he meant the 10 attempts on his life during his investigative work in Cambodia — a threat he still fears from a home in suburban Boston.

Sambath’s presence at Harvard as a Scholar at Risk is co-sponsored by the Department of Visual and Environmental Studies, the Film Study Center at Harvard, the Mahindra Humanities Center, the Nieman Foundation for Journalism at Harvard, and Arts@29 Garden. But the Scholars at Risk program itself, said committee member Jane Unrue, a preceptor in expository writing at Harvard, is in jeopardy. Without funding, she said, it “will cease to exist” by 2015. The group — part of a national network — supports three or four academics or writers a year whose work endangers them in their native lands.

Sambath is now at work on his second film, Skyping with camera operators in Cambodia and doing interviews by phone. When “Suspicious Minds” appears, he said, it will “drop like a bomb” on his native land — exposing current politicians for their roles in the killing fields.

Something like “75 percent of the most powerful people [in Cambodia] had close ties to the Khmer Rouge 35 years ago,” said panelist Chris Decherd, a veteran reporter with a decade on the ground in Cambodia and now the chief of Khmer Service for Voice of America. Meanwhile, Decherd added, educated, energetic young Cambodians offer a “hugely inspiring” hope for the future.

Panelist Gregory H. Stanton, a former State Department official who founded Genocide Watch in 1999, got to the same point. “I am sitting next to a giant,” he said of Sambath. “He may not be as tall as I am, but he is a giant.” Part of that stature comes from the empathy that informs Sambath’s work — the absence of rancor or revenge.

“The most extraordinary thing about the film is that it humanizes Nuon Chea,” said Stanton, who first traveled to Cambodia in 1980. He called empathy the key missing ingredient in the world’s response to genocide. Stanton defined empathy as “relentless love.”

Empathy is Sambath’s mantra. “I am not angry. I do not hate these people,” he said of the personal side of his investigations. “I tried to concentrate — for history.”

In 1996, Stanton wrote a briefing paper for the State Department on the eight stages of genocide — a “logical model of the genocide process” that now numbers 10 stages. Each step can be prevented at both an international and a local level, he said, but courage is required among leaders. In evaluations at the State Department, he said, “There is no box for courage. You are evaluated on how well you follow orders.”