At 125, Johnston Gate gets a facelift 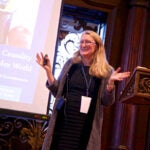 This December, venerable Johnston Gate — the first, largest, and most elaborate of Harvard Yard’s 26 portals — will turn 125. That’s old enough to merit a springtime facelift.

The landscaping project is underway now. The two bedraggled hackberry trees that once framed the gate are gone. A pair of slender juvenile red oaks will take their place. One is in already and the other will be planted on Saturday, along with a thicket of ground cover that every summer will produce lavender blossoms.

A string fence will temporarily protect the new ground cover, which includes liriope, a hardy, grasslike plant that flowers in late summer.

Removing the trees cost $600, which came from the College’s Lamont Fund, said project coordinator Zachary M. Gingo ’98, the senior director of operations in the Faculty of Arts and Sciences Office of Physical Resources and Planning. The full cost of the work, estimated at $5,000, is expected to come from a Johnston Gate Campaign started last year by the Harvard Club of Chicago.

The gate is named after Chicago native Samuel Johnston, Class of 1855, and remains “a little piece of Chicago in Cambridge,” said club president, Kellogg “Ked” Fairbank III ’63. The fundraising campaign has brought in more than $2,000 so far, he said. “We’re just beginning.”

Repairs to gates are a common part of preventative maintenance, said Gingo, but landscape fixes are “rare.”

The new landscape design also developed protocols for snow removal. Plowed snow will no longer be piled on either side of the gate — so less salt will leach into soils at the site.

A prominent fireplug at the site, whitish and tall, will remain for the time being, but may later be moved to the curbside. “Because this is life-safety infrastructure,” said Gingo, “it requires a long and careful planning process.”

The Cambridge Historical Society, which has a say in any alterations to Harvard Yard, approved the Johnston Gate plan. On Monday, Gingo received a certificate of “nonapplicability” from the society attesting that this is only a landscaping project. The gate’s historic features — its brick, ironwork, pillars, or inscriptions — will remain unchanged.

Landscape architect Michael Van Valkenburgh provided the design pro bono. He also arranged for the new trees to be donated. (Van Valkenburgh, whose firm has offices in Cambridge and New York, is the Charles Eliot Professor in Practice of Landscape Architecture at Harvard’s Graduate School of Design.)

A ceremony honoring donors for the Johnston Gate landscaping project will likely take place in May, during Commencement Week.

Johnston provided $10,000 in his will for a “main entrance to the yard.” It is said that the idea of a grand main gate came to him one day as he walked through a gap in the simple, low fence around Harvard Yard. In those days, the 22.4 acres of New England’s pre-eminent University were ringed by granite posts topped with square wooden rails. (For an example of the old fence style, go to the corner of Quincy Street and Harvard Avenue.)

A second Chicago connection is Blair Kamin, Pulitzer Prize-winning architecture critic at the Chicago Tribune. While a Nieman Fellow at Harvard during 2012-13, Kamin co-taught “Rate the Gates,” a January Arts Intensive. The one-week course — along with the work of its students and instructors — inspired Kamin to edit and co-author “The Gates of Harvard Yard,” an e-book published in August 2013.

It contains more than 130 contemporary photos (most of them Kamin’s work); vintage views of the gates; a section on original blueprints; and even a glossary of architectural terms, from “arch” to “volute.” But at the book’s heart are 24 historical and prescriptive essays. They explain, they describe, they ruminate, and — sometimes — the essays wish out loud that some of the gates could get fixed.

Back home, Kamin introduced the e-book to the Harvard Club of Chicago, and argued that Johnston Gate’s street-side landscaping needed a makeover.

From the beginning, after all, Johnston Gate was intended to be what it still is: Harvard Yard’s official main portal. It was designed by famed 19th-century architect Charles Follen McKim, whose firm — McKim, Mead & White — eventually designed 16 of the Yard gates.

The firm also went on to design the Harvard Union (now the Barker Center), Harvard Stadium, and the main campus of Harvard Business School.

In 1889, McKim’s Georgian Revival design for Johnston Gate gave architecturally eclectic Harvard Yard its first aesthetic coherence. It was also the first structure to use “Harvard water-struck brick,” intended to replicate the bricks used in Harvard buildings of the Puritan era.

Fancy Johnston Gate came with a fancy price. The $9,472 spent from the original bequest would be worth more than $250,000 today.