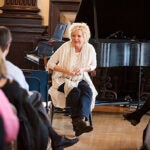 What has 26 doors, hundreds of spears, dozens of flowers, a few pineapples, and one pelican?

That would be the fence encircling Harvard Yard. You get extra credit for knowing a few relevant numbers: that this wrought iron, brick, and stone enclosure, complete with its spearlike palings, is seven-tenths of a mile long, 9 feet high (on average), and marks the boundary of a historic 22.42 acres.

The pelican — once a well-understood symbol of Christian self-sacrifice — appears on the Meyer Gate, donated by the Class of 1879. The same structure also has the Yard’s only motto in German: “Furchtlos und Treu,” or “Fearless and True.”

“Fearless and true” describes the nine students and three instructors who spent Jan. 18-25 investigating the Yard’s gates. They were fearless in pouring a week of vacation into an investigation of mysteries and meanings. And they were true to the spirit of journalistic inquiry. They wondered: What are the gates made of? When were they built? Who paid for them? What architectural styles do they represent? What do they say about Harvard’s sense of self?

“Rate the Gates,” a foray into journalism, was one of four January Arts Intensives sponsored by Harvard’s Arts @ 29 Garden. (The others explored architecture, dance, and theater.) Students of the gates had to practice the skills required of an arts critic. To prepare two essays apiece on the gates, they had to research (go deep and fast), write (be compelling and accurate), and observe (be unblinking, but quirky too).

At noon on one frigid day, to practice observation, the students fanned out to their assigned gates to count pedestrian traffic. Pad in hand, neurobiology concentrator Rachel Wehr ’14 stood by Meyer Gate at the northern edge of the Yard.

“It’s really interesting,” she said of the imposing three-entry portal. “People don’t know its name any more. They just call it the gate to the Science Center.”

Wehr, whose secondary field is archaeology, is more primed than most to learn a little history. For the past two years, she has been the fifer whose piping music led processions during Commencement, occasions that impressed her with how far back Harvard traditions go. “I sit through a lot of spectacle,” she said, “and I hear a lot about the gates.”

During her 30 minutes at Meyer Gate, Wehr counted 103 pedestrians and two dogs. The total count at 15 gates was 1,651, pretty impressive for a freezing day between semesters.

“Rate the Gates” included six undergraduates, two graduate students (one an architect), and one Harvard neighbor.

Gokcan Demirkazik ’14 — call him “Gojo” — came to class with an interest in microarchitecture, which sometimes refers to scaled-down structures without roofs. “I thought of gates as small buildings,” he said, “not just thresholds.”

Rebecca J. “Becca” Mazur ’15 grew up in Cambridge and knows that the entries are more than historical. “They’re very much community pathways,” she said. Mazur added a pet peeve: the locked gates. (There are nine, shut for security reasons or because they are blocked by later construction.)

“This gate should be open” was the subtitle of an essay by Lily Sugrue ’16, who wrote about the Class of 1870 Gate. It’s near the shuttered front door of Holden Chapel along Massachusetts Avenue. She called the portal “an extraordinary confection” (look for the wrought iron pineapples) and the doorway into Harvard’s “secret garden.”

Aleksandra Ola Topczewska ’15 called the gates “snapshots of Harvard history,” though a lot of that history “is lost in the collective memory of Harvard students.” She studied the Class of 1874 Gate (1901), which has been locked since Lionel Hall was built a few feet away in 1926. Brick and iron, she wrote, make “no guarantee of immortality.”

The experts chime in

“The gates are about power and control,” said Chicago Tribune architecture critic Blair Kamin, though they are also portals onto deep history, and miniature representations of how architecture is done.

He was one of three seasoned journalists, all Nieman Fellows this year, who led the way. They provided tutorials on finding facts, gathering impressions, telling stories, and taking pictures. Like the Magi, each one arrived bearing a different gift.

Kamin, winner of a 1999 Pulitzer Prize, brought to class more than 20 years of experience writing about the arts. During his year away from his job, he is researching the architecture of Amherst College, his alma mater. The class provided Kamin with a bonus on that score. Charles F. McKim, whose work is prominent at Amherst, designed many of the Harvard gates.

McKim also set a common aesthetic tone for the enclosure. Before his unifying architectural touch in the late 19th century, said Kamin, “the Yard was such a crazy quilt.”

Freelance science writer Jeneen Interlandi brought to class her genius for long-form journalism, honed during assignments for the New York Times Magazine, Scientific American, and Newsweek. Curiosity is a journalist’s weapon of mass instruction, and it led her to the gates. After a fall tour of the Yard with Kamin, she said, “I realized architecture is a whole new language.”

Finnbar O’Reilly, the prize-winning chief photographer for Reuters in West and Central Africa, brought his gift for making pictures. He is no stranger to gates, having once made a study of doorways during combat assignments in Afghanistan.

The course packet for the Arts Intensive included essays by the three journalists, who distilled onto one page the lessons they wanted to convey.

Kamin wrote that the key to writing art criticism with authority is a grasp of facts. In class and in the essay he repeated an old newsroom dictum about accuracy: “If your mother says she loves you, check it out.”

Style matters too, said Kamin, who many times urged the students not to write like academics, but like storytellers thrilled to impart something new. “We don’t want you to write art history,” he said in an early class. “We want you to write vivid journalism.”

Interlandi agreed, urging students to find the offbeat stories and hidden narratives behind each gate. In her essay, she offered two fundamentals of good writing: Cut out extra words, and “Slay your beauties.” That is: Cut out sentences you love if they don’t contribute to the narrative. Editing is cutting; cutting is bettering.

In his essay, O’Reilly wrote that photography is “about looking, thinking, seeing. There’s generally much more going on around us than we tend to notice.”

On the second day of class, a Saturday, he gave the students a one-hour primer on photojournalism, touching on balance, framing, simplicity, the rule of thirds, and the power of lines. “The gates are our visual entity,” he said of the week’s assignment. The challenge would be to make these static and familiar objects resonate anew.

Most of the students did their shooting on iPhones, a medium O’Reilly has experimented with in the field. “It really isn’t about the equipment you carry around with you,” he said of good photography. “It’s about how you look at things.”

Illustrated essays on the gates were posted on a class Web site, and Kamin is exploring how to turn them into a book.

The class learned that the gates look older than they are. During a tour on the second day, Kathy Ran ’13, who soon became the class expert on the 1901 McKean (Porcellian Club) Gate, stood behind Johnston Gate trying to guess its age. Maybe 300 years? She was off by a couple of centuries.

The College is close to 400 years old, but most of the present entrances to its famous Yard date from barely a century back. The oldest (and tallest) is Johnston Gate, which opened in 1889. Most of the others were finished by 1902. A few popped up in time for the 1936 tercentenary. The newest, dedicated in 1997, is, in historical terms, as fresh as flowers.

Facts rule, said Kamin. “In an age when everybody has an opinion, one of the issues is: How does a critic assert authority?” One answer is fundamental, he said. “You dig.”

The class spent three of seven sessions at the Harvard University Archives, the mother of all places to dig. Its 12 miles of shelf space contain the documentary grist of the University’s centuries.

Staff experts Timothy Driscoll, Robin McElheny, and Barbara S. Meloni showed the students how to wrest research from primary materials. For the gates, that effort included photographs, presidential correspondence, alumni records, student publications, and old blueprints — still crisp — the size of tabletops. “Books,” said Meloni, “are the least of what we have.”

Students and teachers also spent a lot of time at Arts @ 29 Garden, where two conference rooms started as seminar spaces for the class and ended as ad hoc newsrooms, complete with tension and deadlines.

On the last day of class, Interlandi was in her element, peering hard at student stories on her laptop and conferring with the young writers. Kamin did the same. O’Reilly roamed to offer his advice (he started as a writer) and to critique photos.

A visitor marveled at all the learning just one week could bring. O’Reilly looked up. “Wait ’til you read these essays,” he said.