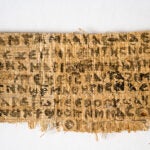 Conference to explore intimacy and joy in faith traditions

A conference April 11 at Harvard will examine varieties of “Love Supreme” in the faith traditions of the African diaspora. Scholars, students, artists, and elders will investigate and celebrate practices that, more often than not, were scattered through the world on the dark wings of the slave trade.

“These are traditions that are right under people’s noses,” said co-organizer Funlayo E. Wood, a Harvard Ph.D. candidate in African and African American Studies whose primary field is religion. “The more they learn, the more they see these traditions everywhere.”

Wood directs the African and Diasporic Religious Studies Association, now two years old. (A year ago, its first conference delved into the theme of divine spaces.) It is the only academic group in the United States devoted exclusively to studying the faith traditions indigenous to Africa as well as those of the African diaspora.

The names of the faiths sound as venerable as the practices themselves. Ifá-Òrìsà is a spiritual practice that originated with the Yoruba of present-day Nigeria. (Wood is an Òrìsà priestess.) Akan traditions originated with the original people of parts of Ghana and the Ivory Coast. The rituals of Dagara arose out of present-day Burkina Faso. (Sobonfu Somé, a practitioner, will deliver the day’s keynote.) Vodou originated in Haiti when it was a French slave colony. Ifá, a West African divination system, is part of the Ifá-Òrìsà faith practiced at Ile Omo Ope, a shrine in Harlem.

The shrine’s chief priest, Awo Oluwole Ifakunle Adetutu Alagbede, will open the conference Friday morning with a libation. Last year, he remarked on the stable and unpretentious ethic behind many diasporic traditions. “Christians look toward the sky,” he said of his water blessing. “We look toward the ground.”

Registrants — 100 so far, with another 50 expected — will get a day of grounding in traditions that emphasize family, stability, and community. The dozen or so presenters and panelists will include American scholars and graduate students, a novelist (Jamaica Kincaid), a painter, a dancer, a filmmaker, and a sexuality counselor.

The counselor, DeShannon Bowens, is a psychotherapist and interfaith minister who spoke at last year’s conference on the legacy of sexual trauma among people of African descent. This year she will talk about Ifá perspectives on sexuality and connection. “As an Òrìsà priestess of the Yoruba-Ifá tradition,” said Bowens, “I know African indigenous religious practitioners have something valuable to bring to conversations about sexuality and religion.”

The sexuality panel has a lighter side too. For one, its called “Ooh Ahh Tcha Tcha: Hypersex, Healing Sex, and Sonic Ecstasy.” (The “sonic” refers to a presentation on Vodou’s ritual rattle by Kyrah M. Daniels, a Ph.D. candidate in the same Harvard program as Wood.)

“Love and Devotion,” said Wood of the conference’s main themes. “It’s important to keep those in balance. Too much love can make you blind, too much devotion can make you a slave.” Negotiating those states of mind is important, she said, “and negotiation is part of what the conference seeks to explore.”

Another panel will look at the “intimate spaces” of marriage, child rearing, and community building. In diasporic religious traditions from Africa “the language is a lot more relational,” said Wood, focusing on community and intimacy rather than simply personal salvation.

The conference will include Zumbi Grey, who represents a sort of kinetic diaspora, though one with overtones of spirituality and community. He is a practitioner of capoeira, a Brazilian martial art that originated a fighting practice that slaves disguised as a form of dance. (The root word comes from Angola.)

Dancer, cultural anthropologist, and historian Nzinga Metzger will look at another kinetic angle — “Dancing in Love and Devotion for Òrìsà” — during an afternoon arts roundtable. “Art, music, and dance are hugely important within the practice of African traditions,” said Wood.

“Film is a relatively new medium,” she added, “and it’s really important [for educating] people who don’t take classes or go to conferences.” (Filmmaker Dalian Adofo — co-director of the documentary “Ancestral Voices: Esoteric African Knowledge” — will be on the roundtable. A film festival on Saturday will follow the conference. Viewers are welcome at the Center for the Study of World Regions, 42 Francis Ave.)

The Los Angeles visual artist Bernard Hoyes, set to participate in an afternoon arts roundtable, embodies the creative African diaspora. He grew up in Jamaica, with little formal schooling until age 10. Instead, he spent all his time with a great-aunt who led a “band”: a cult of believers, he said, who drew from their African roots a cosmology of heavenly, earthly, and “ground” spirits.

There was also drumming, dancing, and — from Christian influences — hymn-singing and readings from the King James Bible. After all, elsewhere in the Caribbean Vodou had cloaked itself “in the guise of the saints,” said Hoyes. “We were able to embrace other religions, and still keep African religions.”

By the time he moved to New York City, at 15, “my spiritual inclination was very deep,” Hoyes said. Becoming an artist seemed natural, although before moving back to Jamaica at 25 he had veered into a world of abstract art that left him unsatisfied. “All of a sudden I hit a wall,” said Hoyes, until “I realized my affiliation with the revived cults. Things started to come back to me.”

Spirituality comes down to feeling a kind of ecstasy in the everyday world, and to feeling present in the world, he said of both his art and the conference. “You can live in struggle,” said Hoyes, “or you can live in the joy of your ancestors.”