A gallery grows in Allston 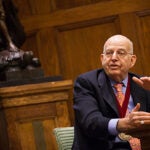 In the exhibit space at the Harvard Allston Education Portal, Shannon Wright, a sculptor from Savannah, Ga., stood before one of her creations, a sculpture of a bear capturing a salmon. Both were shaped using cardboard and were held together with large metal staples.

While she said she doesn’t have “an animal activist point of view,” the artist grew up on a farm, and still works on one. As a result, she said, she is “very into sustainable living.”

The relationship between humanity and animals is on full display at the gallery, where Unbound Visual Arts, a nonprofit based in Allston-Brighton, has organized an exhibit in collaboration with guest curator Jane O’Hara and the Newton-based New Art Center. The exhibit gathers paintings, sculptures, and diverse media from 13 contemporary artists under the group theme “Beasts of Burden.” The exhibit is free and open to the public from 3 to 7 p.m. Monday through Thursday.

John Quatrale, executive director of Unbound Visual Arts, said his organization has been working closely with Ed Portal staff to present contemporary arts in the portal to support local artists.

“They were just very open to making things work so we could use the space,” he said. “It’s a tremendous asset to the community. I think we have the potential here of doing much more — reaching audiences in Allston-Brighton and beyond, and at Harvard too.” Established two years ago, Unbound Visual Arts has quickly established itself as “a mover and a shaker,” Quatrale said, organizing more than 30 solo and group theme-based exhibitions in the area.

The Ed Portal also features a second exhibit, “All Things Change,” which was curated by Quatrale and earlier was displayed in Boston City Hall.

“It’s wonderful that the Ed Portal opened that gallery space for us,” said Ruth Rieffanaugh, a founding member of Unbound Visual Arts and an Allston resident. “Along with the ceramics and the educational work they’re doing there, it’s another way to bring members of the community into that space. It’s really important.”

Mary-Helen Black, administrative director of the Ed Portal, sees the growing partnership between Unbound Visual Arts and the portal as a way to broaden its arts programming and connect with the community.

“Supporting local artists from Harvard and the community provides more opportunities for people to engage with and participate in the arts,” said Black. “It is an important resource that the Ed Portal can provide for the Allston-Brighton and Harvard communities.”

Created in 2008, the Ed Portal was designed as a physical space to bring Harvard and the Allston-Brighton community together, and to serve as that community’s front door to Harvard’s educational, cultural, arts, and recreational resources. That mission resonates with the Unbound Visual Arts initiative, Quatrale said, because its goal is to create excitement around contemporary art, and to develop educational initiatives such as artist lectures and curator talks for the public.

“We want to have art everywhere,” he said. “Our theory is that many people are interested in contemporary art, but they don’t get a lot of exposure to it. This is a scenario where people can come in and experience the work for themselves.”

Rieffanaugh agreed, adding, “I hope more people become aware of the Ed Portal, and all the wonderful opportunities there.”