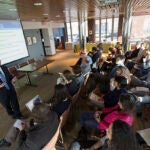 A national perspective on climate change

When Rosalind Picard visited an amusement park recently for her son’s birthday, she wore four high-tech bands, one on each wrist and ankle.

The specialized cuffs, developed by Picard, professor of media arts and sciences at the Massachusetts Institute of Technology (MIT), and MIT Media Lab researchers, tracked a critical component of a place where dizzying rides intentionally submit visitors to disturbing g-forces: excitement levels.

The bands gauge a person’s emotional response to stimuli by tapping skin conductance, an indicator of the state of the sympathetic nervous system, which controls the body’s flight-or-fight response by ramping up responses such as heart rate and blood pressure.

When downloaded and analyzed, Picard’s peaks in excitement registered in the form of a red line that spiked dramatically at times during the day. Predictably, her system went into overdrive on the biggest, fastest rollercoasters and on one ride she preferred “not to talk about.” But surprisingly, the greatest spike of all had nothing to do with the amusement park.

“It was getting out the door in the morning with the kids,” she said.

During a talk Tuesday at Harvard’s Radcliffe Institute for Advanced Study, Picard, known for her work with “computing that relates to, arises from, or deliberately influences emotion,” described how the wrist sensors could help to shed light in coming years on studies of sleep, epilepsy, and even depression.

“The wristbands of the future can, I think, provide some very significant medical insight,” said Picard.

Her presentation was part of the institute’s ongoing series of lectures focused on smart clothes, and was sponsored by Radcliffe’s Academic Ventures program.

Picard’s work and research was spurred by her interest in working with autism patients, many of whom are unable to use words to tell people how they are feeling.

She described tracking a young autistic girl’s reaction to stimuli through the use of a wristband fitted with special sensors, and even charting a baby’s emotional reaction after a feeding through a fuzzy band attached to the infant’s ankle.

“All of a sudden, here in the middle of feeding, the signal goes up, up, up, up, way up,” said Picard, pointing to a dramatic spike on a graph that indicated the baby’s increasing excitement level. “And then at the peak, the baby starts crying. Isn’t that interesting? If you could have seen it go up during the feeding before, you might have been able to think ‘Maybe it’s time to burp the baby.’”

Picard said one of the many surprises she encountered during her work involved the wrist sensor’s ability to monitor the severity of epileptic seizures. When tracking a young boy with autism, she realized one of his enormous spikes in skin conductance occurred just prior to a seizure.

While she and her researchers had spent the bulk of their time studying emotional nuances, they were “suddenly finding these medical events that are just overwhelming.”

Picard said another surprise involved an MIT student who agreed to wear a wristband for a week. Reviewing the results, Picard observed “lots of activation” when he was studying, working on labs, or doing homework. But some of the student’s biggest peaks came when he was asleep.

She suggested that the activity, which was tracked during slow-wave sleep, not the REM sleep cycle most closely associated with dreaming, “may be related to the process of memory formation.”

The final lecture in the series, “Loud Clothing and Noise-Enhanced Sensorimotor Function,” will be given by James J. Collins, William F. Warren Distinguished Professor, professor of biomedical engineering, and professor of medicine at Boston University. The lecture will take place on April 22 at 5 p.m. in Fay House.