The making of a musical 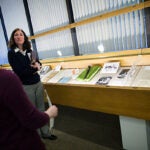 Jason Robert Brown, artist in residence, explains his craft, as his latest show runs on Broadway

“Knowing when to start the music is always one of my favorite jobs,” said Jason Robert Brown, striding to a Steinway piano in the corner of the Davison Room in the Loeb Music Library.

The Tony Award-winning Broadway composer, who is the Blodgett Distinguished Artist-in-Residence at Harvard this spring, was guest teaching in Professor Carol Oja’s seminar on American musical theater.

He sounded a low, dirge-like note on the piano. “Music changes the tenor of the room,” Brown said, striking the key over and over. “No matter what you’re talking about” — dum — “the music will determine the entire context in which you hear that” — dum — “so that what I’m saying sounds vaguely ominous” — dum. “This just changed the molecules of the room that much.”

Next came a staccato plink.

“If I did this, you’d all be sitting and waiting to find out what I was going to tell you. That’s how powerful music can be. … If you start the music, the audience [is] waiting for something to happen. I have to be very respectful of what I want the audience to feel. The music’s going to change everything.”

Brown, composer and lyricist of the musical “The Last Five Years” and Tony-award winning composer of “Parade,” has been described by the Philadelphia Inquirer as “one of Broadway’s smartest and most sophisticated songwriters since Stephen Sondheim.” His new Broadway musical, “The Bridges of Madison County,” directed by Bartlett Sher, with a book by Marsha Norman based on Robert James Waller’s novel, opened in January.

As an artist in residence, Brown is participating in Oja’s seminar and giving master classes and workshops for students through the Office for the Arts’ Learning From Performers program.

His music will be showcased in a sold-out concert-cabaret performance at the American Repertory Theater’s Oberon stage at 8 p.m. Thursday, and will feature performances by Harvard student vocalists. Brown also is working with students on a piece of musical theater that the students are writing and singing. The class production is April 23 from noon to 2 p.m. at Arts@29 Garden.

“Jason Robert Brown is one of the major talents on Broadway today, and his appointment as Blodgett Artist-in-Residence has given the students in my seminar an exceptional opportunity to explore his work in depth, doing so with him by their side,” said Oja, the William Powell Mason Professor of Music.

The aspiring actors and songwriters in Oja’s seminar on March 5 heard Brown and his “Bridges” collaborators, Norman and Sher, discuss the creative process behind a Broadway show.

Norman described “Bridges,” an operatic musical based on the novel about a brief but passionate love affair in the Iowa heartland, as a “story of longing and loss and love that doesn’t work out.” Brown said he wrote the music for the show because he “wanted big singers to do big singing.”

Brown used the music and lyrics from his composition “Before and After You / A Million Miles,” structurally the most complicated in the show, to illustrate the building blocks he uses to make a song.

The creative team described the collaborative process. “These things are hard to make,” said Sher of Broadway musicals, noting that “Bridges” has been four years in the works. “It’s a very thrilling and exhausting process, because you’re changing things all the way to the end.”

The mix of artistic visions that makes the process rewarding also makes it challenging, Brown said. “If you are strong, you want to be working with strong people,” he said. Yet, he continued, “The idea of collaborating with a capital C” with equally strong-minded partners means accepting that they “are going to have ideas that you simply cannot get behind. [This] really requires you to ask: ‘Can I not get behind it because it’s a bad idea … or because I didn’t come up with it?’

“The whole reason you work with somebody strong is to find out if they’re going to elevate your piece,” he said. “That’s what you want.”

The music department’s Blodgett Artist-in-Residence program supports lectures and performances by visiting artists in a variety of musical disciplines. The Learning From Performers program, sponsored by the Office for the Arts, likewise aims to boost student engagement in the arts while integrating the arts more fully into University life.

“Working with both Professor Oja and Jason Robert Brown this semester has been very fulfilling artistically,” said Julia Biedry ’16, a soprano with the Harvard-Radcliffe Veritones. “I love the opportunities to perform in class, and I love that I’m getting the chance to perform with Jason Robert Brown in his concert at the Oberon.”

Madeline Smith ’14 hopes to end up on Broadway herself. The performer with the Harvard-Radcliffe Dramatic Club and the Radcliffe Pitches said her University experience will help her get there.

“I’ve been fortunate enough to conduct pit orchestras, music direct everything from Bernstein to Jason Robert Brown, and compose my thesis. How am I qualified to do any of that? I’m not,” she said. “But Harvard’s support system is so brilliant, you’re never far from a world-renowned conductor, composer, or director. The most consistent and familiar feeling of my Harvard experience has been coming home from rehearsal (to start homework at 1 a.m.), and only thinking: I’m the luckiest girl in the world. Why do I get to do this?”