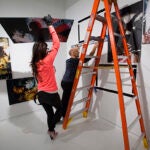 Perhaps the clearest summation of Nelson Mandela comes from the honorary degree citation Harvard presented to the then-South African president in 1998.

“Conscience of a people, soul of a nation,” it said, “he has brought forth freedom from the crucible of oppression and inspired, by his courageous example, the better angels of our nature.”

Harvard scholars and leading Africanist thinkers gathered at Sanders Theatre on Tuesday afternoon to remember and celebrate the life and heroic legacy of the anti-apartheid activist and inspirational world leader who died in December at age 95.

“The greatest day in the history of Harvard was the day we honored Nelson Mandela in 1998,” said  Henry Louis Gates Jr., the Alphonse Fletcher University Professor and director of  the Hutchins Center for African and African American Research, which hosted the event. “So it was only appropriate that we join together to mourn his passing while celebrating his life and interrogating his rich legacy. We put this event together not only to commemorate but also to examine the rich legacy of Nelson Mandela. This transformative figure is not above inquiry, after all, and if anyone should lead this effort, it is Harvard, with its deep relationship with South Africa and its ties to Mandela himself.

Harvard President Drew Faust, who opened “Meanings of Mandela,” also invoked the memory of Mandela’s glorious and historic convocation, calling the occasion “one of the most unforgettable days in the history of Harvard.”

While the 25,000 people who came to Tercentenary Theatre that sunny September afternoon no doubt recall the thrum of African drums, the peal of the Memorial Church bells, and soprano Jessye Norman’s stirring rendition of “Amazing Grace,” she said, it was the man himself who left the one truly indelible mark that day.

“Most of all, they remember Nelson Mandela: his radiance and gentle humor, his aura of nobility and humility and integrity, his inextinguishable devotion to freedom and equality, and his ineffable capacity to inspire, to lift every voice, to raise our sights beyond ourselves,” Faust said.

“If in individual life, we all may reach that part of the long walk where the opportunity is granted to retire to some rest and tranquility,” Mandela said in his speech, “for humanity the walk to freedom and equality seems, alas, still to be [a] long one ahead.”

The Nigerian poet and playwright Wole Soyinka, winner of the 1986 Nobel Prize for literature and currently a Hutchins Center Fellow, spoke powerfully of his friend and longtime ally in the fight for freedom and social justice in Africa.

“The definition of that inhuman condition called bondage, or servitude, is what is experienced by the victim — the absence of freedom. This is the ultimate factor in social revolt, the triggering mechanism that detonates the critical mass of individual or communal dissent. This, I’m persuaded, is what is subconsciously absorbed into the minds and emotions of millions as they watched Nelson Mandela … the recognition that each human entity remains incomplete without the … essence of freedom, that one’s humanity is a sham without the self-realization it confers.

“We all need a touchstone,” Soyinka added, saying later, “The dance is anything but over.”

John Comaroff, the Hugh K. Foster Professor of African and African American Studies and of anthropology, led a spirited discussion and critique of Mandela’s political legacy and what his absence means for South Africa’s future.

Panelists included Margaret Marshall, the retired chief justice of the Massachusetts Supreme Judicial Court who is now a senior research fellow and lecturer at Harvard Law School, as well as a native South African; Adam Habib, vice chancellor of the University of the Witwatersrand in Johannesburg; and Achille Mbembe, research professor in history and politics at University of the Witwatersrand.

The posthumous attention paid to Mandela’s pragmatic political nature, rather than his progressive accomplishments, suggests his memory already is “under threat,” Habib said.

“In the days that he’s passed on, you saw the world, both the national and the global media, speak about a man of pragmatism. They spoke of a man who believed in political reconciliation. These were important points and important characteristics of Madiba, but it seems to me that Madiba was more: Madiba was a democrat, he believed in the rule of law, he believed in nonracialism and, most importantly, I think, he was somebody committed to economic egalitarianism,” he said, referring to Mandela by his clan name.

“What we tend to do is we cherry-pick those parts of the Madiba legacy that we find convenient, so every corporation — even those with the worst labor practices in our society — tend to [look] on Madiba and say ‘he was the ultimate pragmatist.’ And therefore they push unions and others to start engaging in negotiations and use his legacy in the most cynical of ways,” Habib said.

“I think it’s important that as we talk about Madiba, that we recognize that if we want to be truly honest to his legacy, we need to defend the entirety of his legacy, not simply those elements that we find particularly convenient.”

The remembrance was co-sponsored by the Harvard University Office of the President, the Committee on African Studies, the Department of African and African American Studies, the Radcliffe Institute for Advanced Study, and Harvard Law School.