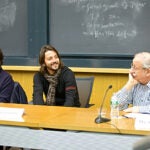 The leadership of Cesar

The Radcliffe Institute’s Schlesinger Library is presenting a long-running exhibit by the groundbreaking artist Judy Chicago. And Tuesday afternoon, to provide the ultimate perspective, it presented Chicago herself.

The versatile Chicago has been creating art in a myriad of styles for half a century, and is perhaps best known for her large installation pieces of the 1970s and ’80s reflecting the role of women in culture and history. She also has created major pieces focused on the Holocaust, and performance art using offbeat materials such as fireworks.

Tuesday’s discussion, “Judy Chicago and Jane Gerhard in Conversation about Art Education and Popular Feminism,” coincided with the library’s exhibit “Judy Chicago: Through the Archives,” open now through the end of September. The Schlesinger is home to Chicago’s papers.

“I often say that in the ’70s we cast the discourse incorrectly. We cast it entirely around gender. Feminism is about values,” Chicago told the Radcliffe audience.

“University studio art education is inherently biased against women,” said Chicago, who worked to change that view through her pedagogy at Fresno State College in the early 1970s, and in later teaching stints.

“Female art is being minimized in all female colleges. Art education is de-skilling, and there is almost no discussion of content.”

Of the process of becoming an artist, Chicago said, “You don’t need an MFA to get into a gallery.” She said many with MFAs are miserable, working jobs they don’t like to pay off debt from an education that left them in a position where they are unable to create art.

Gerhard, a historian and author of “The Dinner Party: Judy Chicago and the Power of Popular Feminism, 1970–2007,” suggested that, “The power of feminism is that it changes people’s lives.”

Chicago is an iconoclast, said Schlesinger Director Nancy Cott, the moderator. She called her “one of the most important, innovative, and productive artists of her generation” and “one of the best-known living artists,” who creates with diverse materials, including photography, ceramics, wood, metal, oil, needlepoint, dry ice, and fireworks.

“In getting to today, she has never found her path easy,” said Cott. “By 1970 she made it clear she wanted to create art from women’s experiences and represent the parts of woman’s body.”

“For many years, people wouldn’t show it,” said Cott. She pointed out that Chicago once wrote, “Feminist art is all the stages of a woman giving birth to herself.”

Still, Chicago said at one point, “Yes, men can create feminist art.” During her recent return to teaching, she discovered some of her male students benefited more from her pedagogy than the women.

In addition, said Chicago, “I am sick to death of ‘women’s’ shows. Yeah, we changed the margins. There’s been considerable change. Women and people of color are showing much more than when I was young. Mostly they are showing in smaller galleries.”

If you look at museums with budgets of more than $200 million, she said, women and people of color aren’t running them. Chicago said the percentage of women artists in major museum collections is just 3 to 5 percent globally.

Women, she suggested, “should see what women before them thought, taught, and created. And they ought to be helped in finding their own voices.” And she said that women artists should have 50 percent of the space in museums because they make up more than 50 percent of the population.

Lelaina Vogel ’15 opened the event with a performance art piece, inspired by Chicago’s work, that contained pointed questions and answers:

“What is a feminist?”

“I myself have never been able to figure out what it is, except I’m called that when I express opinions defining me as something other than a doormat or prostitute.”

“Don’t you want a boyfriend?”

“I love being single. It’s almost like being rich.”

Radcliffe Dean Lizabeth Cohen said Vogel’s piece connected the exhibit with the conversation, and helped introduce the next generation of women influenced by Chicago’s work.

“Judy Chicago: Through the Archives” will be at the Schlesinger Library on the History of Women in America at the Radcliffe Institute through Sept. 30.