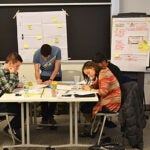 A Harvard professor who has made a career of tackling water insecurity challenges around the world will receive the Stockholm Water Prize, known informally as the “Nobel Prize of water.”

King Carl XVI Gustaf of Sweden, the patron of the prize, will present the award at a ceremony in Stockholm on Sept. 4. A link to the Stockholm Water Prize announcement including the full text of the citation and video interview can be found here.

The Stockholm Water Prize, awarded annually since 1991, will be given to Briscoe for his “unparalleled contributions to global and local management of water — contributions covering vast thematic, geographic, and institutional environments — that have improved the lives and livelihoods of millions of people worldwide.” Citing Briscoe’s expertise as a researcher, policymaker, and hands-on practitioner of water policy management, SIWI lauded him for “providing the world with tools for peaceful, productive, and equitable management of the Earth’s water resources.”

Briscoe received a Ph.D. in environmental engineering from Harvard in 1976. His subsequent career has borne the hallmarks of the iconic Harvard Water Program, deeply rooted in his discipline but able to work across a wide range of other disciplines, bring questions from practice to researchers, and put the findings of research into practice. Over three decades, Briscoe has worked on water issues in many countries and at many levels, from the village to the global. A native of South Africa, he has lived in the United States, Bangladesh, India, and Brazil, and worked in dozens of countries around the world.

After 20 years in leadership and management positions at the World Bank, Briscoe returned to Harvard in 2009 as Gordon McKay Professor of the Practice of Environmental Engineering in the School of Engineering and Applied Sciences, with joint appointments in the School of Public Health and Kennedy School of Government. A teacher of popular undergraduate and graduate courses on water, he has been nominated for major teaching and mentoring awards. Briscoe has led groups of students from across the University in collaborative research on water management in the Colorado, Indus, Mississippi, Murray-Darling, and São Francisco basins.

The Stockholm Water Prize honors individuals and organizations whose work contributes broadly to the conservation and protection of water resources and to improved well-being of the planet’s inhabitants and ecosystems.