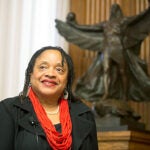 Art, turned on its ear

Critic Kimmelman on the unique qualities of public space

Michael Kimmelman, longtime chief art critic for The New York Times and now its architecture critic, delivered a talk titled “The Politics of Public Space” at the Radcliffe Institute for Advanced Study’s Knafel Center. Kimmelman has written widely on issues of public housing, public space, infrastructure, community development, and social responsibility. He spoke with the Gazette about the importance of public space, his role as a critic, and the art and beauty of architecture.

GAZETTE: Why do you think a public space, which can help bring together thousands of people, can be more influential than the Internet, which can create an online community of millions?

KIMMELMAN: I think one big lesson of a place like Zuccotti Park in New York City [the base of the Occupy Wall Street protests] is that, while millions of people sign online petitions without anybody really noticing, a few hundred people can make headlines around the world for physically occupying a modest space. That’s because they reveal themselves to everybody. But in so doing they also reveal themselves to each other. There is a kind of abstraction to the virtual space that we share online. But face-to-face, people have to share a much wider and more tangible range of experiences and risks, and they de facto become a community literally sharing common ground.

It’s interesting to me that many middle-class Brazilians, who do not live in the favelas, only encountered people from the favelas, as it were on common ground, on equal footing, for the first time in the streets during the protests last year. They had seen these people as workers or servants. Now everybody occupied a space of shared interests and grievances. That’s what happened at Tahrir Square in Egypt as well.

GAZETTE: In recent years we have seen movements taking place in public spaces like the Occupy movement, and protests in Egypt and Turkey. Do you feel any of these movements has led to real change?

KIMMELMAN: Protest is not an end in itself.  In a country like Egypt, power ultimately belongs to those with the tanks and guns. But revolutions take time, sometimes generations. So it may be early to judge Tahrir. I think the effects of Occupy were felt in the recent elections in New York and in a broader discontent in the fact everybody talks about the “1 percent.” The jury’s out in Turkey, but clearly Gezi ended the ruling party’s story about everyone being content.

GAZETTE: What kind of spaces could be created in places like Egypt that might help bring people together, to encounter one another in a more democratic way?

KIMMELMAN: There’s an intimate connection between the health of a democracy and the robustness of its public spaces. Cairo is a glaring example of a complete abdication by leadership, over many, many decades, to provide such spaces. There’s almost no green space in Cairo. A lot of places that are run by dictators don’t like to have public spaces because they don’t want places where people feel they can gather. We see throughout parts of the Gulf, for instance, the absence of sidewalks, plazas, and squares.

GAZETTE: Is there a city in the United States or elsewhere that you think has perfected the art of public space?

KIMMELMAN: I don’t know that perfection is the goal. Cities are organic, evolving. They should change all the time. But there is in Europe a social compact that says, in return for high taxes and membership in society, the government will provide a functioning and successful mass transit system, parks, health care, and education. I think here too often we regard public spaces as an afterthought and are always scrambling to finance what could and really should be basic goods for people. Nowadays, public-private ventures are popular, and sometimes they work, as with Brooklyn Bridge Park. But they are far from perfect.

GAZETTE: Do you think public-private partnerships are a good means of developing more public spaces in cities around the country?

KIMMELMAN: They all depend on whether the project begins with the right question. The right question is: “What public good do we want to achieve, and how best do we use private resources to help get us there?” If it begins the other way around, by asking “What are the profitable possibilities here and how then can we tack on a public component to sweeten that deal for the voters?” — that’s going to fail. The bottom line is that well-conceived public improvements produce better economic results for the private investors. Better public spaces, better infrastructure, and mass transit make for more desirable places for businesses and residents, so in that case it’s a win-win deal.

GAZETTE: Do you see your role as architecture critic as one in which you engage broadly with questions of civic purpose versus simply reviewing a new building?

KIMMELMAN: I think the role of an architecture critic is to look at how we live; to me that can’t be answered only by judging buildings singly, but by seeing the built world at large as a network of interests and projects. It seems irresponsible to me — and unfair to architects — not to broaden the conversation from architecture as a formal, material endeavor to a wider discussion of the built world, because architects themselves are [about] more than just making sculptures out of buildings.

KIMMELMAN: I think growing up in New York City and having a sense of what a neighborhood is, and what a city can and should be like, having those things in my bones has been invaluable to me. Being an art critic enhanced my appreciation for the art of architecture, which I also had since I was a boy, looking around the city at buildings, but making a work of art is very different from making a work of architecture, which entails collaboration, compromise, and all sorts of practical considerations that, in many ways, make successful buildings all the more beautiful.

GAZETTE: Was there one building that had an impact on you from an early age?

KIMMELMAN: No. I think I didn’t see buildings quite that way. Are there buildings that stick in my mind from my childhood? Yes, many of them, because they were part of my daily life, and they were beautiful in the way that they functioned as part of the neighborhood, in my memories, and for the people I knew who used them. But it wasn’t as if I saw a spectacular building and suddenly thought “architecture moves me deeply, and this is what it’s about — this building in isolation.” I think I saw beautiful, remarkable buildings as I did people in society, as distinct but part of a network in which everything is connected, in which we are all dependent on one another. The real, the deepest beauty of architecture, comes from that sense of its being, like us, part of this larger system, part of a society of buildings and places.