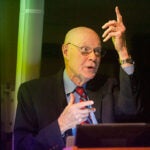 Sizing up the Big Bang

For years, researchers have worked to develop novel molecules for therapeutic or research purposes, and have relied on directed evolution as a powerful technique for generating molecules that exhibit the properties they want.

Led by David Liu, a professor of chemistry and chemical biology and a Howard Hughes Medical Institute investigator, a team of Harvard researchers recently developed the first system for enabling proteins to evolve continuously in the laboratory, without researcher intervention. That system, called PACE (phage-assisted continuous evolution), allowed for protein evolution to take place approximately 100 times faster than previously possible.

Now Liu and colleagues have added a powerful new tool to their arsenal — the ability to eliminate molecules they don’t want during continuous directed evolution.

The researchers have equipped PACE with a negative selection — the ability to drive evolution away from certain traits — to enable the rapid evolution of molecules with dramatically altered properties. That ability, Liu said, could help researchers to evolve proteins to selectively perform surgery on only one exact part of a human genome, or bind only one disease-causing protein in a sea of beneficial proteins. The work is described in a paper published online this month in Nature Chemical Biology.

In addition to negative selection, Liu said, “we developed a way to modulate the selection stringency, so we can change the threshold that’s needed for a given population member to survive versus die.”

Using the new tools, Liu and colleagues were able to evolve T7 polymerase proteins — enzymes that bind to specific DNA sequences, called “promoters,” and begin transcribing DNA into RNA — to recognize new sequences, and to reject the sequences they initially evolved to recognize in nature.

“Traditionally, in protein evolution, it’s been quite difficult to evolve enzymes with truly altered specificities,” Liu said. “It’s much easier to evolve enzymes with broadened activities, ones that can process a new target in addition to their original target. There have been far fewer examples of enzymes evolved to recognize a new target and completely reject the target that nature evolved them to recognize.”

To accomplish their goal, Liu and graduate students Jacob Carlson and Ahmed Badran turned to a variant of the protein that forms the backbone of the PACE process.

That process, Liu explained, begins with a virus, called a phage, that infects bacteria. The phage use E. coli host cells as factories to produce both proteins and new generations of phage, and to perform the key selection step that allows phage-carrying genes encoding proteins with desired properties to flourish.

“Until now, those phage propagate only if they have a desired action,” Liu explained. “To develop the negative selection capability we explored strategies to do the opposite — to penalize those phage that encode genes with undesired activity.”

The solution, he said, came from Carlson, who identified a variant of the P3 protein used in PACE that inhibits phage reproduction, rather than allowing them to propagate. By linking the production of that form of the protein to undesired actions, the team was able to create a system that punishes genes encoding proteins with undesired activities.

Using the system to evolve RNA polymerase molecules is only the tip of the iceberg, Liu said, pointing to a range of therapeutic possibilities his lab is already working on.

“Laboratory evolution really comes down to navigating your way through what evolutionary biologists call a ‘fitness landscape,’” he said. “If you imagine that the landscape is all the possible mutations of a protein, and the elevation describes how desirable they are — we’re trying to find our way to the highest summits while avoiding the valleys.

“These new capabilities — negative selection and stringency modulation — allow us, in a much more precise way, to sculpt the way we travel through that landscape, and to tailor the evolution in a way that’s more likely to succeed and more likely to reach the fitness peaks that are of interest to us.”