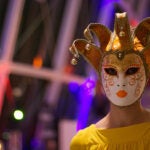 Of masks and mirth

LL Cool J, recording artist, actor, author, and philanthropist, has been named the 2014 Harvard University Artist of the Year. The two-time Grammy Award winner will be awarded the Harvard Foundation’s most prestigious medal at the foundation’s annual award ceremony during the Cultural Rhythms festival on Feb. 22.

“The students and faculty of the Harvard Foundation are delighted to present two-time Grammy Awards host, musician, and actor LL Cool J with the 2014 Artist of the Year award,” said S. Allen Counter, director of the Harvard Foundation. “His pioneering contributions to a new genre of music and distinguished history of creativity have been lauded by young people around the world, and he is greatly admired for his excellent humanitarian efforts through the Jumpstart program, an initiative that creates early education programs in low-income neighborhoods, which increases school readiness and reduces the achievement gap.”

LL Cool J (nee James Todd Smith) is the star of one of television’s highest-rated shows, “NCIS: Los Angeles.” His performance on the show as special agent Sam Hanna garnered him NAACP Image awards in 2011 and 2012. He previously won an NAACP Image Award for Outstanding Male Artist in 2003 and hosted the show in 2007. Most recently, he hosted the Grammy Awards in 2012, 2013, and 2014.

He was the first rap artist to amass 10 consecutive platinum-plus selling albums, in addition to “The Definition” (2004) and “Todd Smith” (2006), both of which achieved gold status.  The multiplatinum artist and two-time Rock and Roll Hall of Fame nominee is currently tied for third place for most Billboard chart debuts by a hip-hop artist. In 2008, LL Cool J released his last disc for Def Jam, the critically acclaimed “Exit 13.”

Throughout his career, LL Cool J has worked to make a difference in the lives of others. He has been an avid philanthropist involved in numerous causes including literacy for kids, and a music and arts programs in schools. Celebrating its ninth anniversary, his charity Jump & Ball tournament — which takes place every August in Queens, N.Y., his hometown — aims to give back to his community by offering a five-week athletic and team-building program dedicated to bringing wholesome fun to young people. He is also a member of the Red Cross Celebrity Cabinet, which raises funds and awareness for initiatives tied to the organization.

Tickets for the daylong cultural festival will be available to Harvard ID holders on Feb. 13-14 for $13. Tickets will be available for the general public beginning Feb. 15 for $20. Tickets may be purchased at the Harvard Box Office.