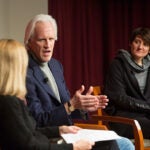 A monument to saved art

Jazzman Herbie Hancock trumpets the wisdom of Miles, the import of breaking rules

You could hear the packed house inside Sanders Theatre hold its collective breath as jazz pianist Herbie Hancock slid onto the bench and gently settled his hands on the Steinway to pluck a few chords that he picked up from trumpeter Miles Davis. They were harmonic ideas, he said yesterday, that opened his mind to new creative possibilities and would go on to shape his illustrious, six-decade career as a performer and composer.

Soundbytes: Herbie Hancock on 'The Wisdom of Miles Davis'

Listen to a clip from Herbie Hancock’s lecture in Sanders Theatre.

“The Wisdom of Miles” was the title of Hancock’s first lecture in the series of talks he will give over the next two months as the 2014 Norton Professor of Poetry. Hancock laid out his vision for the series and spoke of some of the early practical advice (start your own publishing company) and creative insights (learn to listen) that Davis imparted to the then-artistically struggling young musician.

Established in 1925, the title of Charles Eliot Norton Professor in Poetry at Harvard has been held by giants in literature, fine arts, and music, including T.S. Eliot, Robert Frost, Charles Eames, Igor Stravinsky, and Leonard Bernstein.

Hancock’s appointment marks the first time that jazz will be the subject of the Norton lectures, and the first time an African-American has been named a Norton Professor, said Homi Bhabha, the Anne F. Rothenberg Professor of the Humanities and director of the Mahindra Humanities Center at Harvard, which sponsors the post.

“He is both a legend and a pioneer. It is no exaggeration to say that his influence on jazz, and a range of affiliated musical traditions, has been utterly transformative. His musical creativity knows no bounds because it goes hand-in-hand with his remarkable spiritual and intellectual aspirations,” Bhaba said in an email. “I have no doubt that these lectures will display Herbie Hancock’s musical genius in the context of his remarkable contribution to humanitarian issues.”

When approached by Bhabha, Hancock said he was delighted to be selected, but wasn’t sure initially what the Norton professorship was all about.

“I never heard of it,” Hancock said in a phone interview. “And then when I saw the list of people who’ve received this appointment, I was blown away. I said ‘Wow, this august group of people — what am I doing there?’” But he embraced the guiding principle behind the lectures, which is to advance the expression of poetry in its broadest sense.

“Being asked to teach a series of lectures was, I felt, a great opportunity for me to express myself in a way other than through moving my fingers,” he said.

Hancock said the series, “The Ethics of Jazz,” encapsulates the system of morals and values that have guided him musically and spiritually. His upcoming talks will delve further into his life as a working musician and composer, but will also touch on his experiences as cultural diplomat, his experimentation and innovation with music technology, and his spiritual growth, gleaned from four decades of practicing Buddhism.

“My overarching concept is that the human spirit is a real treasure. Your life is a real treasure. [It’s] multi-faceted, even if you don’t realize it,” Hancock said in the interview. “There’s a tendency to think that there are things outside of ourselves that are the cause of our unhappiness or the cause for our difficulties in life, and I don’t believe that. I believe that the way you look at things can be a catalyst for bringing out wisdom in your life and choosing to take those difficulties and becoming victorious over them.” He said to “never give up on the fight to go beyond what you thought you were and into what you can become. I really believe we are all here to help each other realize the best of what we can be, which is the catalyst for living a life of happiness.”

Hancock is a 14-time Grammy Award winner, most recently for his 2007 record “River: The Joni Letters,” which won for album of the year, the first time a jazz artist had taken the music industry’s top prize since Stan Getz and Joäo Gilberto’s 1964 bossa nova classic, “Getz/Gilberto.” His career has been marked by daring innovation in virtually every decade.

Born in 1940, Herbert Jeffrey Hancock grew up in Chicago’s Hyde Park neighborhood on the city’s South Side. His talent on the piano surfaced as a boy. At age 11, Hancock won a local contest whose first prize was performing a Mozart concerto with the Chicago Symphony Orchestra.

He went to Grinnell College, a liberal arts school in Iowa, to study electrical engineering. But music’s pull was strong, luring Hancock back to Chicago where he quickly fell in with trumpeter Donald Byrd, an early mentor, and began gigging with saxophonist Coleman Hawkins.

Hancock found the artistic and commercial success that would mark his six-decade career in 1962 with “Watermelon Man,” a breakout R&B-flavored jazz hit from his debut album, “Takin’ Off,” on Blue Note Records. That recording caught the ear of Davis, who soon invited Hancock to join what many call Davis’ second great quintet, a legendary ensemble that featured Davis in one of his creative peaks as a composer and bandleader, as well as some then relative unknowns: saxophonist Wayne Shorter, bassist Ron Carter, and drummer Tony Williams. Still, Hancock wisely maintained a solo career on the side during that era, penning a number of works like “Cantaloupe Island” and “Maiden Voyage” that would become jazz standards.

In the late 1960s, Hancock explored the interplay of acoustic and electronic instruments in jazz, as well as the fusion of avant-garde jazz ideas and improvisation with contemporary funk and rock rhythms in the mode of Davis’ 1970 landmark “Bitches Brew.” Hancock did so through his new band, Mwandishi, and the soundtrack for a new educational children’s TV program by Bill Cosby, “Fat Albert and the Cosby Kids.”

Hancock’s funk/jazz explorations would lead him to another creative and commercial milestone in the mid-1970s with his band and record “Head Hunters.” The group’s groundbreaking sound influenced funk contemporaries, and would be revived by hip-hop artists in the early 1990s.

Hancock’s synth-heavy instrumental “Rockit” was an unlikely pop hit in the 1980s and would be hailed for its mash-up of electronic funk and hip-hop, as well as its pioneering music video.

In addition to his active concert schedule, Hancock is currently a professor at UCLA and chairman of the Thelonius Monk Institute of Jazz. He is also a founder of the International Committee of Artists for Peace and was named a UNESCO Goodwill Ambassador in 2011.

While at Harvard, Hancock also will speak about his film-scoring work, for which he won an Academy Award in 1986 for “Round Midnight.” The Harvard Film Archive will screen two other films that he scored, Michelangelo Antonioni’s “Blow-Up” (1966) and the thriller “The Spook Who Sat by the Door” (1973) later this month.

Hancock’s next lecture, “Breaking the Rules” will take place Feb. 12.

“The reason I want to talk about that is because each of us has a voice that has our own individual way of expression. No matter what job we may have, each of us can find our own personal take on things, and it’s important to find that.”

The remaining lectures include “Breaking the Rules,” Feb. 12; “Cultural Diplomacy and the Voice of Freedom,” Feb. 27; “Innovation and New Technologies,” March 10; “Buddhism and Creativity,” March 24; “Once Upon a Time …,” March 31. All lectures are at 4 p.m. at Sanders Theatre, 45 Quincy St., Cambridge. Events are free, but tickets are required. Tickets will be available starting at noon on the day of each lecture at Sanders Theatre and online (handling fee applies). Limit of two tickets per person. Tickets valid until 3:45 p.m. on the day of the event.