Dots on the borderline 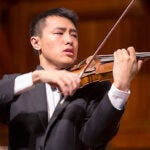 In 2006, artist David Taylor was driving along a remote dirt road, eager to get an up-close look at the United States’ border with Mexico, when he spied “a cast-iron obelisk incongruously placed in the middle of the desert.” That chance encounter with one of the 276 monuments marking the international boundary, as it extends from El Paso, Texas/Juárez to San Diego/ Tijuana, led to a seven-year photography project.

The result is a series of images of the monuments, the sites surrounding them, and the people Taylor encountered along his way, including border patrol agents, immigrants, smugglers, and drug traffickers. A selection of his photos will be on view at the David Rockefeller Center for Latin American Studies in a show co-sponsored by the Harvard Art Museums titled “David Taylor: Working the Line.” The exhibit, which runs through May 18, will be introduced with a panel discussion this evening from 6-8 in the Tsai Auditorium.

The Gazette spoke by phone with Taylor, who was in the Dallas airport en route to Harvard, about the show.

GAZETTE: What did you think when you saw that first monument?

TAYLOR: I had no idea what it was. I vaguely recollected seeing a photograph of one of them at one point in time or another and was wondering how many more there were because it had the number seven on it. The next step was deciding that I wanted to go see more because I was so fascinated by this anachronistic-looking monument with text describing that it was a marker for the boundary between the United States and Mexico. From there began a project to photograph all of them, although I didn’t really arrive at that immediately. It sort of simmered for a little while.

About the same time, I fortuitously answered a request for proposals to produce public artwork for a border patrol station, not having any real clear understanding of what that might mean in its entirety. And then that effectively turned into a whole lot of access that enabled me to photograph within border patrol stations and along the international boundary. … The circumstances and chance encounters and complexity of all of those really came together in a way that I could never have imagined and led to a project that really encompasses the last six-plus years.

GAZETTE: Is there any encounter that really stuck out for you?

TAYLOR: Lots of encounters. Probably some of the most vivid were situations in which I would meet people who, for all of the clarity of their station, whether they be a smuggler or a border patrol agent or a migrant, they somehow had some aspect of them that definitely defied stereotype and expectation. Periodically I would meet individuals who would either by virtue of what they did, or what they said, or what their circumstance was, surprised me and trumped stereotypical portrayal.

And that’s when I became very interested in the work. I think that there’s a very well-trodden, very monolithic portrayal of the border at this stage in the game. There are good guys and bad guys and the narrative of who is who is clearly defined. And while all of that exists, more often than not, the gray area and the nuance are more complicated and less clear-cut than the accepted narrative. So, for instance, meeting border patrol agents whose parents were from Mexico and had crossed the border illegally, or who might have crossed the border illegally themselves in their youth.

GAZETTE: What do you hope people take away from this show?

TAYLOR: While the photographs show a world that people might not be readily exposed to, I also think the photographs aren’t entirely consumed by spectacle and drama. I think a lot of the portrayals of the border are about that. I think that when you go into a lot of these spaces, whether they are out in the land or in an urban setting up against the border, or a border patrol station, life goes on. People go about their daily lives. I think that while I do offer a view … it’s a view into places that people don’t ordinarily get to see, and that place, that space does not necessarily conform to their stereotypical idea.

GAZETTE: Who erected these monuments?

TAYLOR: They were installed by an international boundary commission in the 1890s and the 1860s in two successful surveys. The first survey left 52 monuments, and the second survey brought the total up to 258. And then in the early 20th century there were 18 that were installed to more frequently mark the border in more urban areas. The monuments are jointly maintained and owned by both countries, and they are the literal location of the border. They are the physical expression of the location of the border. People often ask what side the obelisk is on, and the answer to that is “neither.” They are the border.

GAZETTE: What are you working on next?

TAYLOR: My next project traces the historic border between Mexico and the Western territories of the United States, what was the 1821 border with Mexico that runs from Brookings, Ore., to Port Arthur, Texas. That was a 2,300-mile border that was never fully realized. I, with a fellow artist from Tijuana, [am] going to do a site-specific intervention by marking the historic border.