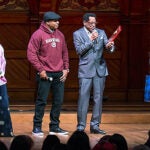 Cool with a capital C

To analyze a problem, says journalist Katherine Boo, soar through data and get grounded in reality

What can a writer teach a designer of the built environment? Perhaps a lot, such as a few basic principles of fieldwork: Learn from both the sky view of data and the ground view of reality. Don’t talk just to the powerful. And stay awhile.

Katherine Boo came bearing these and other insights for a week as a senior Loeb Fellow at Harvard’s Graduate School of Design (GSD). Boo is a long-form journalist who specializes in poverty and what she calls that socio-economic state’s “tropes of hope and innovation.”

She also arrived bearing recognition and status, with the chops to offer a lesson or two. Boo, after all, has already hit the trifecta for nonfiction writers: the Pulitzer Prize, the National Book Award, and a coveted gig as a staff writer at The New Yorker. She also won a MacArthur Foundation Fellowship, often called the “genius” award.

To understand Boo’s reporting methods (immersion is best) and her worldview (hope abides), start with “Behind the Beautiful Forevers,” her brutally factual and vividly novelistic study of Annawadi, a Mumbai slum. That effort won a National Book Award in 2012.

Annawadi, which was settled in 1991 on land owned by the nearby international airport, is within sight of five luxury hotels. At one edge is a trash-rimmed lake of sewage. Of its 3,000 residents, only six have permanent jobs. Annawadi models the extremes of capitalism: the flexible, innovative poor struggle against the barriers of education and caste with such energy that there is little of it left over for collective action or the pursuit of justice.

The capstone event during Boo’s visit was a lecture in jam-packed Piper Auditorium on Feb. 20. Its fancy title was “Exploitation, Innovation, and Documentation in 21st-Century Slums,” but its lessons — from a writer to designers — pivoted on a single word, one of Boo’s favorites: “granular.” That is, when you research places, get down to the smallest details.

With Boo on last week’s GSD visit was another 2014 senior Loeb Fellow: her husband, Sunil Khilnani, an author and a professor of international politics at King’s College, London. He introduced her to Mumbai, where he was convinced her immersive techniques would work.

James Stockard, GSD’s curator of the Loeb Fellowship and a former fellow himself (1978), introduced Boo. He got the point of her presence at GSD right away. “The best journalists challenge us to create our own best work,” he said. And reading journalism as pointed as hers “is how we stimulate our best creative gifts.”

Stockard read a passage from the Mumbai book. With Dickensian power, Boo described an open lot as “a kind of beachfront for a vast pool of sewage that marked the slum’s eastern border. [It was] bedlam most nights: people fighting, cooking, flirting, bathing, tending goats, playing cricket, waiting for water at a public tap, lining up outside a little brothel, or sleeping off the effects of the grave-digging liquor dispensed from a hut two doors down. …”

For her audience, Boo set out to explain how she approached the Annawadi project — reporting for months at a time, over four years starting in 2007 — and what she learned from it. Her field guide of advice, buttressed by 15 years of reporting on poverty in the United States, seemed applicable to designers, to other scholars, and to ordinary visitors. “Empathy is a muscle,” Boo observed, and training to see things as they are is one way to exercise it.

Boo included imperatives of attention: stay independent, outside the ken of non-governmental organizations (NGOs), for instance. Listen more than talk. Document everything, using notebooks, audio, and video. Read official documents. (Gathering accepted facts adds “conviction to the writing,” she said, “and keeps me out of libel jail.”)

Be frank about why you are suddenly in a place you are not from. (“I don’t play poor,” said Boo, who engages people head-on. “I just try my best to do justice to their reality.”) Meet a variety of people, not just the informal leaders. And stick around for a while. Sheer duration is a strategy that trumps “a five-day studio visit,” she said. “I enter a community knowing I’m going to be there a very long time.”

Lastly, know the big data, what Boo called “the God shot” of reality that official statistics represent. But be ready for reality on the ground, too. Her reporting in Annawadi reinforced an idea she had acquired as a young reporter: Small stories can have big power. They can move donors, inform NGOs, and clue in lawmakers. “Better policies might get made,” said Boo, “if we understand individual lives.”

In her book, Boo told the small story of Asha, who had a gift for solving problems, but over time used it to exercise political corruption. Asha became Annawadi’s informal ward boss, landlord, and banker.

Boo also told the small story of Abdul, a teenager from the slum’s Muslim minority who at age 6 set out to exercise his own gift: mining value from trash. Before long, “what people threw away,” said Boo, created a slum-scale recycling empire that was enough for Abdul “to lift a family of 11 well beyond subsistence.”

Abdul’s story was also a point of entry into what Boo called “serial survival entrepreneurship,” the ever-fluid technique of extracting value from circumstances. With admiration, she recalled the ad hoc team of thieves who devised a tool for removing wheel boots from airport taxis when they could no longer disassemble new construction “screw by screw.” Either way, the metal was worth cash. It was a story, said Boo, that explained “the nature of work” at the fringes of the global economy: flexible, clever, independent, and often extra-legal.

This same kind of enterprising but solitary work has a dark side, she said. Factory work, which is disappearing fast, offered opportunities for collective effort and provided workers with an informal sense of commonweal. The person you worked next to could lend you a bit of money, or help you care for a child. If you are on your own, earning informal wages, you fear taking time for others. “The conditions of collective action are sabotaged,” she said.

Individual initiative — the soul of capitalism — has another dark side. “People up the ladder innovate too, sometimes to improve exploitation,” she said, setting off a dynamic of power that crushes those with the least. “Hope is a double-edged thing.”

But there is always hope in the act of investigation. Over time, Boo saw that the people she was writing about became her “active co-investigators” in documenting how conditions really were. When homeless teenagers took over her video camera, she said, they used it for fun for a while, but then they used it to record their lives. (Boo’s lecture was illustrated by a looping slideshow of images taken by slum children.)

The same teenagers even joined in an investigation into the murder of a friend. In the end, said Boo, “they saw this random journalist standing in front of them as the only hope they had.”