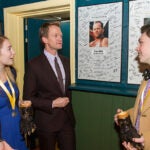 Kenneth I. Chenault, J.D.’76, and Karen Gordon Mills, A.B. ’75, M.B.A. ’77, have been elected to become members of the Harvard Corporation, the University announced today.

Chenault is the longtime chairman and chief executive officer of American Express Company.

Mills served until recently as the administrator of the U.S. Small Business Administration, and is now a senior fellow at Harvard Business School and the Harvard Kennedy School of Government.

Both will begin their service as Fellows of Harvard College on July 1, 2014, having been elected by the Corporation with the consent of the Board of Overseers, in accordance with the University’s charter.

Chenault and Mills will fill the vacancies created by the planned departures of Robert D. Reischauer, A.B. ’63, and Robert E. Rubin, A.B. ’60, who both intend to step down this summer after 12 years of service. As announced in December, William F. Lee, A.B. ’72, will succeed Reischauer as the Corporation’s senior fellow.

Announcing the appointments, Reischauer and President Drew G. Faust said: “Ken Chenault is one of the nation’s most respected executives, someone who’s widely engaged in civic and nonprofit pursuits and who will bring remarkable leadership qualities and a global perspective to the Corporation’s work. Karen Mills has ably led a major federal agency through a time of challenge and change, and she has served Harvard and Radcliffe with distinction and devotion in a series of important governance roles. Harvard is again fortunate to be able to turn to two such accomplished and dedicated graduates to help guide the University’s affairs and help all of us envision and embrace the possibilities ahead.”

Kenneth Chenault has served for more than a decade as the highly regarded chairman and chief executive officer of American Express Company. Under his leadership, American Express has advanced its position as one of the world’s most prominent global services companies. Chenault became chairman and CEO in 2001, 20 years after arriving at American Express. During that time, he progressed through a series of leadership roles including director of strategic planning (1981), president of the Consumer Card Group (1989), president of Travel Related Services (1993), vice chairman (1995), and president and chief operating officer (1997).

“I’m honored to be returning to Harvard and joining the Corporation,” said Chenault. “The University has been an important part of my life for many years. The Harvard community represents a wide range of perspectives, beliefs, and fields of endeavor, while also remaining grounded in common core values. The faculty, students, and staff are dedicated to academic excellence and to making lasting contributions to the world in which we live. I am proud to be associated with them and look forward to working with President Faust and my colleagues in this new role.”

Widely engaged in civic pursuits and broadly experienced in governance matters, Chenault serves on the boards or advisory councils of numerous nonprofit organizations, including the National Academy Foundation, the NYU Langone Medical Center, the Smithsonian Institution’s National Museum of African American History and Culture, the National September 11 Memorial & Museum at the World Trade Center, and the Bloomberg Family Foundation. He also serves on the executive committee of the Business Roundtable, as a member of the Business Council, and on the boards of both IBM and The Procter & Gamble Company.

Chenault is a graduate of Bowdoin College, Class of ’73, where he served on the board of trustees from 1986 to 1993, and a graduate of Harvard Law School, Class of ’76, where he served on the visiting committee from 2006 to 2013 and is now a member of the Dean’s Advisory Board. He is a member of Harvard’s Committee on University Resources. In addition, Chenault has been the recipient of several honorary degrees from academic institutions.

A native of Long Island, N.Y., Chenault lives in New York City with his wife, Kathryn Cassell Chenault, an attorney and member of numerous nonprofit and educational boards. Their son Kenneth is a graduate of Harvard College, Class of 2012, and their son Kevin is currently a senior at Harvard College.

An admired public servant with a strong commitment to innovation and entrepreneurship and extensive experience in Harvard governance, Karen Gordon Mills served in President Obama’s Cabinet from April 2009 through August 2013 as the administrator of the U.S. Small Business Administration. In that role, she was a member of the president’s National Economic Council, led a federal agency of more than 3,000 employees, and managed a loan guarantee portfolio of nearly $100 billion while also assuring that nearly a quarter of U.S. government prime contracts were awarded to small businesses. She is credited with having guided the SBA through a period of significant renewal and change in the aftermath of the global economic crisis that unfolded in 2008-09, including efforts that supported two record years for SBA-backed lending to small business.

“Our Harvard community includes the most remarkable students, staff, and faculty, and together they have potential to contribute to and influence our world in so many meaningful ways. With that in mind, it is an honor to take on this important role,” Mills said. “I look forward to working with the entire leadership team and President Faust to help shape the future of this great University and its continued role as a driving force for critical thinking, innovation, and excellence.”

Mills now serves as a senior fellow at both the Harvard Business School and the Harvard Kennedy School’s Mossavar-Rahmani Center for Business and Government, focusing her attention on U.S. competitiveness, entrepreneurship, and innovation. She was a resident fellow at Harvard’s Institute of Politics in fall 2013.

Mills recently resumed her role as president of MMP Group, a private equity firm based in Maine, a position she held before her time at the SBA. Previously, she was a founding partner and managing director of Solera Capital, a New York-based venture capital firm. She has served on the boards of Scotts Miracle-Gro, Arrow Electronics, Guardian Insurance, Latina Media Ventures, and Annie’s Homegrown. A member of the Council on Foreign Relations, she is past chair of Maine’s Council on Competitiveness and the Economy, a past director of the Maine Technology Institute, a former member of the Maine Governor’s Council for the Redevelopment of the Brunswick Naval Air Station, and a former trustee of The Nature Conservancy of Maine. Early in her career, she was a consultant for McKinsey & Company and a product manager for General Foods.

Mills graduated from Harvard College in 1975 and from Harvard Business School, where she was a Baker Scholar, in 1977. She has remained an active and dedicated alumna, including prior service in key governance roles. She served on Harvard’s Board of Overseers from 1999 to 2005, was elected by her peers as vice chair of the board’s executive committee for 2004-05, and served for two years as chair of the board’s standing committee on finance, administration, and management. She was a trustee of Radcliffe College from 1985 to 1993.

Born in Wellesley, Mass., Mills now lives in Brunswick, Maine, with her husband, Barry Mills, president of Bowdoin College since 2001. They have three sons, William, Henry, and George, who is currently a junior at Harvard.