‘The weapon of love’ 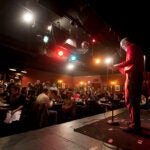 The man who literally wrote the book on the preaching of Martin Luther King Jr. will himself preach about the civil rights leader during Sunday’s sermon at the Memorial Church. His homily will come a day before the traditional Monday holiday commemorating King, who was assassinated in 1968.

Richard Lischer of Duke Divinity School is a professor of preaching and a frequent commentator on religion for The New York Times and National Public Radio. The onetime Lutheran pastor is the author of “The Preacher King” (1995), described by the author as “a rational account of King’s prowess as a speaker and preacher of the gospel.”

The Atlanta-born King was the son and grandson of preachers, and the great-grandson of a slave exhorter, who preached to those without freedom. His church oratory often had such lyric power, Lischer has written, that it is best understood when printed as a poem. “I don’t march ’cause I like it,” King said in a sermon shortly before his death, part of which Lischer once rendered as a poem:

“He was God’s trombone,” the professor wrote of King, “a true prophet” who harnessed on behalf of social justice “the black church’s joy in the performed word.” For 13 years on the public stage, King combined political acumen and New Testament rhetoric in an American social struggle so riven with racial hatred that it is difficult to imagine today.

At the heart of King’s preaching was “the weapon of love,” the title of Lischer’s sermon this Sunday. King used the phrase early in his preaching, said Lischer by phone, promising that his social-justice movement would not use violence. Instead, it would use agape, a classical Greek word that means unconditional love. In Christian terms, King said, that should extend to all humankind. The concept involved more than friendship (philia), he preached in sermons including one at Harvard in 1965, and it was not just sexual love (eros) either.

“If you think love is just a feeling,” said Lischer, “you’re really dealing with an extremely stunted view” of what King saw as humans’ need for a godly love of one another.

“His memory lasts,” said Lischer, “and will last for a very long time because he set a very high mark for our country and for humanity as a whole.” But King “spoke a lot less about love” in the last few years of his life, he added, and more about the fate of those who “obey the voice of love,” toward a redemption that plays out in social terms. Fundamentally, said Lischer, King was a preacher and had a “stigmatic confidence in conversion, change, (and) the human heart.”

But King was also an angry man, Lischer said, an overlooked side of this famously peaceful preacher. Late in his short life, he turned away from an increasing entrée to the corridors of power and from a smooth alliance with Christian liberals. Instead, he embraced anti-war sentiments, along with an edgy passion for the economically oppressed, no matter what their race.

Journalist David Halberstam once called King “the angriest man in America,” said Lischer, and the preacher by today’s standards could be “as angry as any Jeremiah Wright.” (Wright, a Chicago pastor and onetime friend of Barack Obama, was the subject of intense media scrutiny in 2008 for angry sermons that included what critics cited as racially divisive comments.)

At the same time, King always believed in that “weapon of love,” insisting that anger “doesn’t need to dissolve into violence and despair,” said Lischer. King told black audiences in particular that “there is a way to win your freedom and not lose your soul.”

In 1955, King earned a doctor of philosophy degree in theology at Boston University, where theologian Howard Thurman introduced him to the Indian leader Mohandas Gandhi’s principles of nonviolent resistance.

King was also was no stranger to Harvard, where he attended classes as a special student in 1952 and 1953. He completed two courses on key figures in philosophy, earning grades of B (Plato) and A- (Alfred North Whitehead).

Off and on, King also preached at Harvard’s Memorial Church, starting with the 1959-1960 school year. By then, he was already four years into a civil rights struggle that had begun with the Montgomery Bus Boycott of 1955-1956.

In October of 1962, the 33-year-old activist minister delivered a lecture at Harvard Law School (HLS) on “The Future of Integration.” (That same year, HLS hosted speeches by the Rev. Billy Graham and the labor leader Jimmy Hoffa.) In his remarks, King hewed to the idea of “nonviolent direct action,” calling integration a matter of struggle, and not an artifact of official policy — “not some lavish dish,” he said, “that the federal government will pass out on a silver platter.”

Listen to a clip from the speech delivered at Harvard Law School in 1962 by Martin Luther King Jr.

King also used his speech to call for legislative action. “The law cannot make a man love me,” he said, “but it can keep him from lynching me.” (The Civil Rights Act of 1964 came two years later.) Six months after the lecture, King was held in a Birmingham, Ala., jail. Ten months later came the March on Washington, and the “I Have a Dream” speech.

That speech, Lischer once said, conformed with the old Christian notion that a prophet often encounters truth and revelation “by means of dreams (and) when a prophet has a dream … it always comes true.”

Of all the visits paid to Harvard by King, perhaps the most famous took place on Jan. 10, 1965, just five days before his 36th birthday. The previous October, King had been awarded the Nobel Peace Prize, the youngest person to get the award. He had been invited to be guest preacher at the Memorial Church on that snowless, chilly Sunday morning. King’s sermon was part of a one-day whirlwind visit to the Boston area. Later, in the evening, he delivered a talk around the corner from Harvard Yard, to a full hall at what was then Rindge Technical School on Cambridge Street.

King’s student-sponsored visit to Harvard came just two months before the televised violence of the protest march in Selma, Ala. A photographer at what was then the Harvard University News Office documented the visit. Image 6A of a contact sheet now at the Harvard University Archives provides the best-known picture of the visit. In black and white, a smiling King, bundled up in a dark overcoat and wearing a short-brimmed hat, waves to an unseen crowd of admirers. To his right, hands pocketed and wearing a pale fedora, is Nathan M. Pusey, Harvard’s 24th president (1953-1971). Famous for his earlier clashes with Red-baiting Sen. Joseph McCarthy, and an ardent supporter of civil rights, Pusey later said he barely knew King, but was struck by the energy of his admirers.

“Everywhere, well-wishers mobbed King,” wrote student journalist Ellen Lake ’66. The summer before, she had taken part in the Mississippi Freedom Summer Project, an attempt by volunteers — largely white college students from the North — to register voters.

At the Memorial Church, King cautioned against hatred and revenge, despite the violent cauldron of political fervor surrounding the Civil Rights Movement. “The philosophy of an eye for an eye,” he said, “results in everyone being blind.”

But King pulled no punches, either, calling for federal voting registrars in some Southern ballot districts, and legislation to end de facto segregation in schools. (By the summer of 1965, Lake had co-founded The Southern Courier, a civil rights newspaper in Georgia and Alabama that closed in 1968.)

Another Harvard student reporter was in the audience to hear King deliver his sermon. Jacob Brackman ’65 would go on to a career as a journalist at Newsweek, The New Yorker, and Esquire, and as a Broadway lyricist and movie producer. His story three days after the visit recalled three standing ovations at the church, as well as the power and musicality of King’s preaching cadences, “his basso ‘m’s’ fading out, and ‘r’s’ rolling …”

King also talked about the “four plateaus” in the upward climb to American racial equality, from slavery to post-Civil War segregation, to legal steps outlawing segregation. The fourth plateau, a “New Jerusalem” of equality, was yet to come. King also repeated his 1962 message at HLS that legislation could not make someone love him, but could prevent his lynching. “That’s pretty important too,” he said. Laws, King said, could at least “restrain the heartless.”

After the sermon, Price hosted a luncheon for Pusey and King. It was here that Brackman — flexing the descriptive powers that would later serve him in the literary arts — provided an intimate look at the visiting King, who was “natty as a J. Press ad in his three-piece continental suit,” wearing cuffless pants and laceless black shoes.

“Style,” wrote Brackman. “That is what characterizes King best. Not the elemental, visceral appeal of a roughed-up revolutionary, but the smooth polish of a movie star, an haute politician, a foreign car salesman. He is a handsome, clear-eyed man with an air of good living, almost of opulence. Instinctively, he pauses in his speech and turns to the cameras.”

But behind the polish was the substance. In September 1964, a month before getting the Nobel Prize, King visited Boston to announce he was donating his papers to Boston University. During a streetside rally, he delivered a message that seems obvious today: that racial inequality had a home in the North as well as the South. “Injustice anywhere,” he said, “is injustice everywhere.”

Three months after his January 1965 visit to Harvard, King was in New England again, this time to address a joint session of the Massachusetts Legislature on April 22. Nearly word for word, he repeated the closing of his “I Have a Dream” speech from two years before.

The next day, King was at the head of the first civil rights march he ever led outside the South, a procession of thousands from Roxbury to Boston Common.

The march took King past 397 Massachusetts Ave., a three-story row house on the Roxbury-South End line, where he had lived as an obscure graduate student little more than a decade before. That was 1952-1953. The civil rights march in Boston was partly an homage to the region that had introduced him to tactical nonviolence. Three years later, in that same month, in Memphis, Tenn., an assassin gunned King down. He was 39.

The rest is history. But the preacher lives on in the power of his sermons, along with the bravery and hope his words offered. Lischer once quoted King: “Every time God speaks from the pulpit, He says: Go forward.”

Richard Lischer will deliver his sermon “The Weapon of Love” in honor of  the Rev. Martin Luther King Jr. on Sunday, Jan. 19, in the sanctuary of Harvard’s Memorial Church.