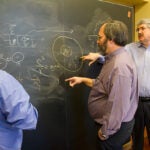 For decades, researchers working to understand how altruistic behavior evolved have relied on a concept known as inclusive fitness, which holds that organisms receive an evolutionary benefit — and are able to pass on their genes — through cooperative behavior.

In a new study, Martin Nowak, a professor of mathematics and of biology, E.O. Wilson, the Pellegrino University Professor Emeritus, and Benjamin Allen, a research associate in mathematical biology and an assistant professor at Emmanuel College, find that not only is inclusive fitness impossible to calculate in most cases, but also that it often leads to incorrect conclusions. The research is described in a paper published in the Proceedings of the National Academy of Sciences.

“Our main goal is to develop a rigorous mathematical theory of evolution,” Nowak said. “Inclusive fitness is an antiquated concept. Its flaws and limitations are not understood by the majority of people who use it.  Once these limitations are clear, the door is open for a meaningful interaction between empiricists and theoreticians working in this area of sociobiology to construct new models and ask precise questions.”

A classic example of altruism, Nowak said, would be one animal opting to forgo reproduction to help care for a sibling’s offspring. Because of that assistance, the sibling may eventually have more offspring than otherwise. The problem for proponents of inclusive fitness, Nowak said, is how to calculate the benefit for the sibling and the cost for the altruist.

“There are two ways you can pass on your genes,” Nowak explained. “You can have your own children, or you can help your sibling reproduce. Once we have this insight, the question is how to make it precise?

“One approach is to introduce a virtual quantity, which is called inclusive fitness, but the problem is that this quantity can almost never be calculated or measured,” Nowak said. “For most evolutionary processes, inclusive fitness does not exist.”

Though it had been accepted for nearly half a century, the first seeds of doubt about the theory were sown several years ago when Nowak, Wilson, and Corina Tarnita (now at Princeton University) published a paper in Nature showing that the math behind inclusive fitness did not work even in simple cases.

In response, proponents of the theory turned to a mathematical regression method to uphold the view that inclusive fitness can always be calculated.

“The regression method is a curiously backwards approach,” Allen said. “It generates a just-so story, which is often wrong, for an outcome that is already known.”

To show the ineffectiveness of the technique, Allen and his co-authors produced three models in which the regression method yielded results that were clearly wrong.  For example, a nurse who helps the weakest is misinterpreted in this approach as a spiteful bully, and a jealous individual who attacks the strongest is mistaken for an altruist.

One of the main reasons why inclusive fitness theory does not work, Nowak said, is that it addresses the problem at the wrong level.

“It’s asking the question at the level of the individual … and in most cases it’s impossible to resolve it at that level,” he said. “If you look at an ant colony, you cannot say what the inclusive fitness is for a particular worker or a particular soldier, but if you have two gene variants, you can calculate which one will be passed on under what circumstances, and that analysis is done without ever having to calculate inclusive fitness.

“Inclusive fitness is like the complex system of epicycles devised by Ptolemy to support the idea of an Earth-centric universe,” he continued. “The need for such complexity disappears when you look at the problem from the correct perspective — in our case, the perspective of the gene. On the level of genes there is no inclusive fitness.”