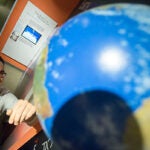 A team of Harvard scientists and engineers has demonstrated a new type of battery that could fundamentally transform the way electricity is stored on the grid, making power from renewable energy sources such as wind and sun far more economical and reliable.

The novel battery technology is reported in a paper published in Nature on Jan. 9. Under the OPEN 2012 program, the Harvard team received funding from the U.S. Department of Energy’s Advanced Research Projects Agency — Energy (ARPA-E) to develop the grid-scale battery, and plans to work with the agency to catalyze further technological and market breakthroughs over the next several years.

The paper describes a metal-free flow battery that relies on the electrochemistry of naturally abundant, inexpensive, small organic (carbon-based) molecules called quinones, which are similar to molecules that store energy in plants and animals.

The mismatch between the availability of intermittent wind or sunshine and the variable demand is the biggest obstacle to using renewable sources for a large fraction of our electricity. A cost-effective means of storing large amounts of electrical energy could solve this problem.

The battery was designed, built, and tested in the laboratory of Michael J. Aziz, the Gene and Tracy Sykes Professor of Materials and Energy Technologies at the Harvard School of Engineering and Applied Sciences (SEAS). Roy G. Gordon, the Thomas Dudley Cabot Professor of Chemistry and Professor of Materials Science, led the work on the synthesis and chemical screening of molecules. Alán Aspuru-Guzik, professor of chemistry and chemical biology, used his pioneering high-throughput molecular screening methods to calculate the properties of more than 10,000 quinone molecules in search of the best candidates for the battery.

“Imagine a device the size of a home heating-oil tank sitting in your basement. It would store a day’s worth of sunshine from the solar panels on the roof of your house …” — Michael Marshak

Flow batteries store energy in chemical fluids contained in external tanks, as with fuel cells, instead of within the battery container itself. The two main components — the electrochemical conversion hardware through which the fluids are flowed (which sets the peak power capacity) and the chemical storage tanks (which set the energy capacity) — may be independently sized. Thus the amount of energy that can be stored is limited only by the size of the tanks. The design permits larger amounts of energy to be stored at lower cost than with traditional batteries.

By contrast, in solid-electrode batteries, such as those commonly found in cars and mobile devices, the power conversion hardware and energy capacity are packaged together in one unit and cannot be decoupled. Consequently they maintain peak discharge power for less than an hour before they are drained, and are therefore ill-suited to store intermittent renewables.

“Our studies indicate that one to two days’ worth of storage is required for making solar and wind dispatchable through the electrical grid,” said Aziz.

For this reason, a growing number of engineers have focused their attention on flow-battery technology. But until now, flow batteries have relied on chemicals that are expensive or hard to maintain, driving up the cost of storing energy.

The active components of electrolytes in most flow batteries have been metals. Vanadium is used in the most commercially advanced flow-battery technology now in development, but it sets a rather high floor on the cost per kilowatt-hour at any scale. Other flow batteries contain precious metal electrocatalysts, such as the platinum used in fuel cells.

The new flow battery developed by the Harvard team already performs as well as vanadium flow batteries, with chemicals that are significantly less expensive, and with no precious-metal electrocatalyst.

“The whole world of electricity storage has been using metal ions in various charge states, but there is a limited number that you can put into solution and use to store energy, and none of them can economically store massive amounts of renewable energy,” Gordon said. “With organic molecules, we introduce a vast new set of possibilities. Some of them will be terrible and some will be really good. With these quinones we have the first ones that look really good.”

Aspuru-Guzik noted that the project is very well aligned with the White House Materials Genome Initiative. “This project illustrates what the synergy of high-throughput quantum chemistry and experimental insight can do,” he said. “In a very quick time period, our team homed in to the right molecule. Computational screening, together with experimentation, can lead to discovery of new materials in many application domains.”

Quinones are abundant in crude oil as well as in green plants. The molecule the Harvard team used in its first quinone-based flow battery is almost identical to one found in rhubarb. The quinones are dissolved in water, which prevents them from catching fire.

To back up a commercial wind turbine, a large storage tank would be needed, possibly located in a below-grade basement, said co-lead author Michael Marshak, a postdoctoral fellow at SEAS and in the Department of Chemistry and Chemical Biology. With a whole field of turbines or a large solar farm, one could imagine a few very large storage tanks.

The same technology could also have applications at the consumer level, Marshak said. “Imagine a device the size of a home heating-oil tank sitting in your basement. It would store a day’s worth of sunshine from the solar panels on the roof of your house, potentially providing enough to power your household from late afternoon, through the night, into the next morning, without burning any fossil fuels.”

“The Harvard team’s results published in Nature demonstrate an early, yet important technical achievement that could be critical in furthering the development of grid-scale batteries,” said ARPA-E Program Director John Lemmon. “The project team’s result is an excellent example of how a small amount of catalytic funding from ARPA-E can help build the foundation to hopefully turn scientific discoveries into low-cost, early-stage energy technologies.”

Team leader Aziz said the next steps in the project will be to further test and optimize the system that has been demonstrated on the benchtop and bring it toward a commercial scale. “So far, we’ve seen no sign of degradation after more than 100 cycles, but commercial applications require thousands of cycles,” he said. He also expects to achieve significant improvements in the underlying chemistry of the battery system. “I think the chemistry we have right now might be the best that’s out there for stationary storage and quite possibly cheap enough to make it in the marketplace,” he said. “But we have ideas that could lead to huge improvements.”

By the end of the three-year development period, Connecticut-based Sustainable Innovations, LLC, a collaborator on the project, expects to deploy demonstration versions of the organic flow battery contained in a unit the size of a horse trailer. The portable, scaled-up storage system could be hooked up to solar panels on the roof of a commercial building, and electricity from the solar panels could either directly supply the needs of the building or go into storage and come out of storage when needed. Sustainable Innovations anticipates playing a key role in the product’s commercialization by leveraging its ultra-low-cost electrochemical cell design and system architecture already under development for energy storage applications.

“You could theoretically put this on any node on the grid,” Aziz said. “If the market price fluctuates enough, you could put a storage device there and buy electricity to store it when the price is low and then sell it back when the price is high. In addition, you might be able to avoid the permitting and gas-supply problems of having to build a gas-fired power plant just to meet the occasional needs of a growing peak demand.”

This technology could also provide very useful backup for off-grid rooftop solar panels — an important advantage considering some 20 percent of the world’s population does not have access to a power distribution network.

“The intermittent renewables storage problem is the biggest barrier to getting most of our power from the sun and the wind,” Aziz said. “A safe and economical flow battery could play a huge role in our transition off fossil fuels to renewable electricity. I’m excited that we have a good shot at it.”

William Hogan, Raymond Plank Professor of Global Energy Policy at Harvard Kennedy School and one of the world’s foremost experts on electricity markets, is helping the team explore the economic drivers for the technology.