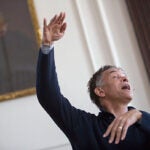 Greenfield '87 covers origins, patterns of her work in talk with students

“I was fascinated by this idea of an impoverished elite,” Lauren Greenfield told a Harvard crowd last Thursday. The photographer and documentary filmmaker was referring to her College thesis, a series of intimate images that captured the daily lives of French aristocrats who had lost their fortunes.

Greenfield ’87 explained that the notion of the once-rich struggling to find their way resonated with her and her experience growing up Los Angeles, where glitz and glamour were the norm and a person’s worth often seemed to be less about deeds than income.

“Class was defined exclusively by money.”

Greenfield’s powerful senior project helped launch her career. The work drew the attention of National Geographic, where she became an intern, her first step in a career that has included work with The New Yorker, The New York Times Magazine, Le Monde, The Guardian, and Vanity Fair. In 2006, Greenfield made her first feature-length documentary. “Thin,” about patients in a center that treats eating disorders, was distributed by HBO.

Greenfield’s return to campus was an entry in the Office for the Arts’ “Harvard JAMS!” series. The sessions connect students and members of the Harvard community with alumni who have made a career in entertainment or the arts.

Many of Greenfield’s images seem to echo themes from her youth, and her later reaction to materialism and celebrity. Explorations of beauty, body image, and consumerism have been important aspects of her work.

Greenfield concentrated in visual and environmental studies at Harvard and produced her first monograph, “Fast Forward: Growing Up in the Shadow of Hollywood,” a decade after she graduated. The project tracked a mix of privileged and poor students who attended her Los Angeles high school.

“I’ve always been interested in documenting people in a cultural context … [and] fascinated by cultural values, cultural identity, and ritual,” she said.

The impoverished elite was again the focus of Greenfield’s gaze in her 2012 documentary “The Queen of Versailles.” The film follows a couple as their plans to build a 90,000-square-foot palace in Florida, billed as the largest private home in the United States, grind to a halt amid a faltering economy. Greenfield was praised for her ability to reflect the same fear that flooded the nation — albeit on a larger scale — as millions of Americans struggled to keep their homes.

“I do kind of try to show their humanity, so that they are a mirror for us,” she said. “I think that is kind of the point; not criticizing different people, but seeing how they reflect the culture and how that affects us.”

Greenfield’s early interest in photography had much to do with her exposure to the work of street photographers of the 1960s and ’70s, especially masters such as Robert Frank and Garry Winogrand, whose pictures, she said, commented on society and revealed “something previously unrevealed.”

Her time at Harvard also helped her find her artistic path. Greenfield singled out her former professors Robb Moss, the current chair of Harvard’s Department of Visual and Environmental Studies, and Barbara Norfleet for their inspiration and guidance.

“What I see, looking back, is that my work has been a process of going deeper and deeper into the photography and the filmmaking and the sociological and anthropological approach that I was introduced to as an undergrad,” said Greenfield, who is at work on a thematic retrospective examining notions of wealth and the American dream.

“In a way, the connection to my undergraduate studies has become more meaningful over the years rather than less. And so I am really grateful for my experience here.”