At one with Thoreau 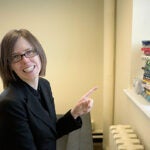 A century and a half ago, Maine’s northern woods were a bit wilder.

The logging roads crisscrossing the region had yet to be cut, and the state’s highest mountain, 5,269-foot Katahdin, was relatively unknown, having been climbed by just a handful of intrepid souls since its first recorded ascent, in 1804.

But the area is still far from tame. It’s also not altogether different from the place written about glowingly by Henry David Thoreau after three trips there, in 1846, 1853, and 1857.

It’s that wildness — touched by Thoreau’s sensibilities — that photographer Scot Miller seeks to bring to the public with a new exhibition at the Harvard Museum of Natural History (HMNH), one of the Harvard Museums of Science and Culture (HMSC).

The show, which opened this month and runs through September, pairs Miller’s images of Maine’s majestic wilderness with items from Harvard’s collections, including a specimen of a plant, painted trillium, that Thoreau collected between Bangor and Moosehead Lake during his 1857 trip; animal specimens from the region; and a Penobscot-made snowshoe owned by Thoreau.

Visitors will be treated to views of Katahdin, which Thoreau spelled “Ktaadn,” of misty mornings on the lakes Thoreau traveled, of moose and spectacular foliage, and of the region’s tumbling streams and rivers.

HMSC Executive Director Jane Pickering said the exhibition illustrates the discipline-bridging purpose of the Harvard Museums of Science and Culture because it includes not just natural history specimens — botany and zoology — but also involves literature and, as represented by native artifacts, anthropology.

Over six years Miller spent 120 days in the woods, conducting research for the book. He retraced Thoreau’s steps in all seasons, accompanied by a backpack full of camera gear. During extended summer trips — his longest was 12 days — he’d sometimes wake in the wee hours to hike to the spot he wanted to photograph before the sun rose at 5 a.m.

“I got to places 60 to 70 miles north of nowhere,” Miller said, adding that he encountered everything from snowstorms to moose to the region’s legendary black flies and mosquitoes. “It’s kind of penance to experience the place in June or July. The mosquitoes are voracious.”

Miller became enamored with Thoreau’s writing while working for the Walden Woods Project several years ago. He had read and reread “Walden” when he realized the 150th anniversary of the book’s publication, in 2004, was drawing near. As he did with “The Maine Woods,” Miller photographed Walden Pond and created an illustrated version of the book. Similar work followed with Thoreau’s “Cape Cod.” For the current project, Miller said he read “The Maine Woods” six or seven times.

“I want to reintroduce people to his writings. So much is still appropriate,” he said.

“Thoreau’s Maine Woods: A Journey in Photographs with Scot Miller,” which commemorates the 150th anniversary of the publication of Henry David Thoreau’s “The Maine Woods,”  is on exhibit through Septe. 1, 2014 at the Harvard Museum of Natural History, 26 Oxford St., Cambridge, Mass.