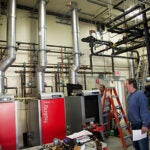 Warmth from the woods

Climate change may not have been as prominent in the headlines in the 1980s as it is today, but it was certainly on the minds of engineers designing a new sewage-treatment plant for Boston.

Today, the massive Deer Island plant can boast of being one of the first major coastal projects that had a nearly 2-foot rise in sea level designed into its construction. That is good news to area residents because the plant — one of the nation’s largest — handles sewage from 61 Boston area municipalities and 2.5 million customers.

Built to clean up Boston Harbor, partly in response to a major lawsuit, the plant was designed to withstand a 100-year storm, then was raised an additional 1.9 feet in anticipation of possible sea-level rise. Its outflow tunnel, which disperses treated wastewater into the ocean nine miles offshore, was made larger to account for changes to the dynamics of the gravity-powered system as the sea level rises.

A group of students from Harvard and Brazil toured the plant and spoke to officials there about its design and operation. The Jan. 16 visit was part of a two-week, cooperative winter program sponsored by Harvard’s School of Engineering and Applied Sciences (SEAS), the David Rockefeller Center for Latin American Studies, and the University of São Paolo in Brazil.

This year’s subject, “Urban Adaptation to Climate Change: Resilient Cities,” brought students to Deer Island and to New York, where they toured areas affected by 2012’s Superstorm Sandy, including the Red Hook section of Brooklyn and the South Ferry Station.

The program is the latest in an annual series that began five years ago. The collaborative program between Harvard and one of Brazil’s most prestigious engineering schools alternates visits to Cambridge and Brazil, drawing roughly half of its 29 students from each institution.

Patrick Ulrich, assistant director for undergraduate studies in environmental science and engineering at SEAS, said this year’s topic was selected as a natural sequel to last year’s program on energy and climate change, which was held in Brazil. This year’s program went well, Ulrich said, with students from different countries meshing and forming friendships.

“They’ve been fantastic. The students are a really good group. They integrated … right off the bat,” he said.

Lindsay Woodson, a master’s degree student at the Harvard Graduate School of Design, said she enjoyed getting to know the course’s Brazilian students and listening to the perspectives they brought. The New York excursion to view the recovery from Sandy was most interesting to her, she said, because her academic focus is on risk and resilience.

Steven Wofsy, the Abbott Lawrence Rotch Professor of Atmospheric and Environmental Science and one of the program’s core faculty members, said a main purpose of the effort is to give engineering students direct exposure to people in the field who work daily on issues the students are learning about.

“I think it’s been spectacular,” Wofsy said. “It’s hard to decide which is the high point.”

Students spent about an hour touring Deer Island, viewing the giant, egg-shaped digesters, flares for burning off excess gas, and primary and secondary treatment areas. The visit included a talk by Stephen Estes-Smargiassi, director of planning for the Metropolitan Water Resources Authority (MWRA), which runs the plant, and Dave Duest, manager of process control at the plant.

Estes-Smargiassi gave a brief history of the plant and an overview of the MWRA system, which not only collects and processes wastewater, but also provides clean drinking water from its reservoirs. Deer Island, Estes-Smargiassi said, is in many ways a huge recycling plant because it treats and reuses much of the effluent it takes in.

The egg-shaped digesters convert much of the waste into natural gas, which is harvested to provide 64 percent of the plant’s power. Much of the remaining solid matter is sent as sludge to a plant in Quincy, where it is dried and processed into fertilizer. Some 10 million gallons of treated wastewater are recycled through the plant, providing a source of water for tasks — such as tank cleaning — where non-potable water can be used. Of an average 260 tons of sludge that come into the plant each day, just 10 tons are released into the ocean as treated effluent, while 105 tons are made into fertilizer. The rest is digested and converted to gas.

In addition to natural gas produced in the waste processing, the plant also uses renewable energy, provided by a solar array and two giant wind turbines.

Though Boston was spared the worst effects of Superstorm Sandy, Estes-Smargiassi said that was partly because it passed through the area at low tide, while it hit the New York region at high tide. Projections, however, show that if it had been high tide in Boston, there would have been historic flooding, something that prompted the MWRA’s board of directors to embark on a new appraisal of the flood-vulnerability of the authority’s facilities.

The analysis, Estes-Smargiassi said, evaluated the impact of both a 100-year flood and 2.5 feet of sea-level rise. He said the exercise showed that although a handful of facilities would not be affected, including Deer Island, quite a few would be — some significantly. By analyzing each facility’s purpose and whether it had redundancy within the system, the authority has begun prioritizing changes, seeking temporary mitigation measures, and designing more permanent changes as part of systemic upgrades across the authority’s system.

That way, Estes-Smargiassi said, facilities across the system are gradually made better able to withstand flooding and storms so that, even if the 2.5-foot rise proves overly optimistic and is revised upward again, the system in the end would be better prepared.

“If it looks like 2.5 feet isn’t good enough, we’ll pick a better benchmark,” he said. “That may mean some facilities are not as well-protected as the new ones, but we will be better off.”