Sharing ‘the wisdom of Boston’ 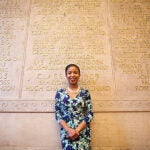 A town hall meeting with Boston Mayor-elect Marty Walsh, well-supported by Harvard affiliates, broke into 11 idea-generating sessions on Saturday, focusing on various issues facing the city, from public safety to schools to housing and economic opportunity.

The event was coordinated by the Rappaport Institute for Greater Boston at Harvard Kennedy School (HKS). The goal of the meeting, held at Roxbury Community College’s Reggie Lewis Track and Athletic Center, was described by moderator and Rappaport Director Edward Glaeser as sharing “the wisdom of Boston” with the mayor-elect, who Glaeser suggested would be “the most inclusive mayor that I could possibly imagine.”

Seven of the sessions were facilitated by members of the Harvard community. Each facilitator presented the session’s recommendations to Walsh in an afternoon meeting attended by about 1,000 people and moderated by Glaeser, who also facilitated the economic development session.

Of his own session, Glaeser mentioned “one overriding theme: the benefits [of development] have not been equally shared.” Glaeser garnered widespread applause when he shared his session’s recommendation “to have more community representation on the Boston Redevelopment Authority.”

Facilitator Bridget Terry Long, Xander Professor of Education at the Harvard Graduate School of Education, told Walsh that the education session had focused on three major themes: closing the achievement gap; collaboration and coordination among schools, parents, community groups, and businesses; and the need for more open communications.

The facilitator of the energy, environment, and open space session, Jerold Kayden, Frank Backus Williams Professor of Urban Planning and Design at the Harvard Graduate School of Design, described his session’s vision for Walsh: “to make Boston the most beautiful city in the United States” by implementing such policies as “more and better recycling in city parks” and more coordination among city and state agencies to achieve that lofty goal.

The public safety session facilitator, Christine Cole, executive director of HKS’s Program in Criminal Justice Policy and Management, joined Kayden in calling for more city-state coordination in meeting goals, and also recommended more community input in policing to ensure that “police services are delivered fairly and equally to all.”

After the session reports concluded, Walsh thanked participants for “a lot of great ideas” and expressed a strong desire to continue the public conversation. “We have to continue this dialogue as we move into office,” he said.

As Glaeser walked around the room holding a microphone for questioners, Walsh addressed a number of concerns about education, economic development, and more. Responding to a question about education, Walsh said, “We need to close the achievement gap and get kids on to college.” Answering a question from a recent college graduate about the high cost of living in Boston, Walsh stressed “creating more affordable housing and opportunities for employment” for all city residents.

He also expressed support for expanding the hours of operation for the MBTA, and urged audience members “to take the train” whenever possible. When asked whether he would consider suspending development projects recently approved by the Boston Redevelopment Authority, Walsh replied, “We will look at some of the deals, but I won’t stop development” in Boston. Walsh concluded the day by thanking the Rappaport Institute for its contributions.

Afterward, Glaeser told the Gazette “it was an honor and privilege to be a part” of the town hall meeting along with other Harvard participants, adding, “We have personnel [at Harvard] who are used to facilitating meetings and have a strong commitment to public service.”