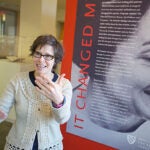 As a child in a tiny Iranian village, Farrin Abbas Zadeh crafted her own lightbox from glass and a lamp. With it, she traced the intricate designs of Persian rugs and began gradually improvising on the designs. Pretty soon, she was designing her own rugs.

“My parents weren’t very educated, so they didn’t encourage me when they saw I had this talent,” said Abbas Zadeh.

The modest money she made from selling her designs went toward her education. Many years later, now an architect and urban planner, Abbas Zadeh is not only a visiting fellow in the Department of Near Eastern Languages and Civilizations, she is partway through her first Harvard art show, “A Window to Heaven: Motifs of Nature in Life and Dream,” sponsored by the Center for Middle Eastern Studies.

An adjunct professor at the Rhode Island School of Design, Abbas Zadeh credits nature as her primary artistic inspiration. “I grew up on a farm, so nature is in my blood,” she said. And she credits a little-known Harvard organization with giving her the courage to pursue her artwork on a larger level.

Three years ago, when Abbas Zadeh was a fellow at the Graduate School of Design, she attended a Harvard Neighbors open house. Harvard Neighbors aims to promote community for staff and faculty through cultural and educational programs and events, and Abbas Zadeh enrolled in Kitty Pechet’s art explorations class.

“I showed Kitty and my other friends in the class my work, and they really encouraged me,” she recalled.

Her artwork echoes traditional Persian design, but the meanings are wholly her own. Abbas Zadeh is big on symbolism — her research at Harvard focuses on “how nature becomes art, the meaning of symbols and the origin of those symbols, and how they travel through different religions and cultures” — and her artwork depicts dreams, love, and life using mostly flowers, figures, and nature-based symbols.

“When I close my eyes, I remember my grandfather’s farm and lying down under the trees, and still I can feel the coolness seeping into my body,” she said.

The meticulous designs take her months to complete, she said. But with her art show in full swing, Abbas Zadeh has turned her sights toward the launch of a housewares line called FazArts, producing everything from furniture, textiles, and dinnerware to wallpaper and rugs. Her designs will appear in Boston and New York City.

Dividing her time among teaching in Providence, a fellowship at Harvard, and a fiancé in New York City, Abbas Zadeh is busy but finds the time to work on her art in trains and cafés and on the weekends.

And she draws and paints it all by hand, just as she did when she was a child. “When you draw something by hand, you transfer your soul and spiritual meaning,” she said.

“A Window to Heaven” runs through Dec. 18 in the Center for Government and International Studies’ (CGIS) Knafel Concourse Gallery, 1737 Cambridge St.