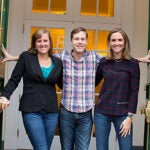 Men on a mission

No explosives or suspicious devices were found following the evacuation and sweep of four Harvard University buildings Monday by federal, state, and local law enforcement agencies.

In a statement Monday afternoon, Executive Vice President Katie Lapp said the search was prompted by an email sent to the Harvard University Police Department at about 8:40 a.m. indicating that explosive devices had been hidden inside Emerson Hall, Sever Hall, Thayer Hall, and the Science Center.

All four buildings were cleared and reopened by shortly before 3 p.m., as campus life returned to normal on the first day of final exams.

Out of what Lapp called “an abundance of caution,” Harvard police issued a campuswide alert at 9:02 a.m. notifying recipients of “unconfirmed reports” that explosives were in the four buildings and ordering everyone to evacuate while police conducted a thorough investigation.

The Yard was restricted to Harvard ID holders for several hours. Final exams that had been scheduled in Emerson Hall, Sever Hall, and the Science Center were canceled or rescheduled. Freshmen living in Thayer were temporarily relocated to Annenberg Hall, where President Drew Faust, Donald H. Pfister, the interim dean of Harvard College, and Jasmine M. Waddell, a resident dean of freshmen, chatted with the gathered students during breakfast.

Students heading into Annenberg Hall on Monday night, where the Harvard University Choir was slated to drop by to sing Christmas carols, seemed to be in good spirits despite a day of disruption.

After a day of disruption in which four campus buildings were evacuated, freshman students dining at Annenberg Hall that evening were treated to a surprise, impromptu performance by the Harvard University Choir.

Andrea Delgado ’17, was in a lecture hall at the Science Center waiting for her “Life and Physical Sciences A” exam to be handed out when what sounded like a fire alarm went off, forcing students outside into the cold. “I was so ready. I had a big breakfast, I got there early,” she said.

Before long, Delgado and others started receiving University alerts and texts from friends that the alarm was related to possible explosives in the building and across campus. She and some classmates headed over to Annenberg to wait out the evacuation. Once the exam was canceled, she said, she was offered the option of taking the exam at 6:30 Monday night, taking it in February, or accepting her grade going into the final.

Because she had another final Tuesday morning, Delgado opted to accept her grade as it was prior to the exam. “I think it’s fair; it’s really hard to wait for five weeks and have to try and keep that in your head,” she said.

Alex Beyer ’17 said he was merely inconvenienced by the incident. “It was fine. I just feel bad for the people in the morning exams.”

Beyer had a Math 21a final scheduled for 2 p.m. at Emerson Hall, but because of the evacuation, students spent much of the morning and early afternoon waiting to find out whether Emerson would reopen and their exam would begin on time. Shortly before 2, administrators and the course instructor gave everyone the green light and the exam went off without a hitch.

The ongoing investigation into who made the threat is being led by Harvard police in coordination with the Cambridge Police Department, state police, and federal law enforcement.

Associate Dean of Harvard College John Ellison said final exams slated for the rest of the week would remain as scheduled. Those who missed their exams due to the evacuation should be in touch with administrators about a makeup date or other arrangement.

Ellison outlined several options for students who elected not to take their scheduled afternoon exam because they were upset or because their routines were disrupted by the events, including being graded on their coursework completed to date, excluding the final exam. Also: the opportunity to request receiving a pass/fail grade without penalty.

“We understand most students are expressing eagerness to take the exams for which they have prepared,” Ellison said in an email to students. “However, if for any reason a student does not feel able to take an exam — including anxiety, loss of study time, lack of access to material and belongings left in one of the affected buildings, or travel schedule — he or she should be in touch immediately with his or her resident dean.”