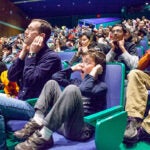 Science and delight, in the blink of an eye

111 undergraduates are honored at ceremony

The midyear graduation ceremony did not feature the same level of pageantry or tradition of Harvard’s annual May Commencement, noted Gabriel Cunningham ’13, but that did not mean there was less reason to celebrate.

Surrounded by family and friends, 111 Harvard College undergraduates were honored on Tuesday during ceremonies at the Knafel Center, the former Radcliffe Gymnasium.

Students graduate “out of cycle” and become midyear graduates for a variety of reasons. Some take time off for family or health reasons, while others choose to explore a nonacademic pursuit or travel. And then there are some students who graduate early.

“We may not think of ourselves as the Class of 2013½, but here we are together,” Cunningham added.

Cunningham introduced interim College Dean Donald H. Pfister by reading excerpts from the messages the dean has been sending to undergraduates throughout the fall term, which have touched on everything from giant pumpkins to the fact that Harvard’s Herbarium is larger than Yale’s to leisurely reading pursuits.

“Thank you, Dean Pfister. You have made Harvard a little more human for all of us,” Cunningham said.

“Being out of step can be an advantage. Welles thought it informed his art, allowing him perhaps to see things differently,” Pfister said. “Some of you have worked and lived the life of a non-student … others have studied and traveled far away from Harvard Yard. In all cases, you have likely had a chance to reflect upon your future, to ponder ways of achieving important goals you may never have envisioned several years ago.”

Paul Farmer, Kolokotrones University Professor and Chair of the Department of Global Health and Social Medicine, delivered the ceremony’s faculty address. He drew upon the recent death of South African leader Nelson Mandela to stress that greatness does not happen accidentally and can be found in unlikely places.

“To use medical terms, how do you diagnose greatness at birth? You don’t, and you can’t. Greatness is usually forged in sometimes dramatic, but also in humble ways. Greatness, like its neglected sibling goodness, is cultivated over years. Both the great and the good within us can be cultivated, even behind prison walls,” Farmer said. “None of you are likely to face the trials of imprisonment or of privation, but you will all face trials as surely as the sun shines. And all of you will make decisions good and bad. It is my hope that you make them with goodness in mind, and enjoy, as Nelson Mandela surely did, the plenitude of a meaningful life.”

In his address, Alexander Wells ’13 told his fellow graduates that “being out of phase” is something that has provided comfort to him.

“One of the most relieving things for me at Harvard was being out of phase,” he said. “If there is anything I have learned here it is that everyone feels like they are out phase, no one thinks they’re doing it right, and everyone is just making things up as they go along. When Harvard students are at their most understanding, they are capable of the most wonderful things. “

The event was again coordinated by the Senior Class Committee and the Harvard Alumni Association (HAA).