In the ‘Library Test Kitchen’ 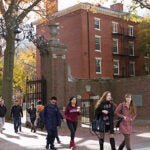 At the Frances Loeb Library, students from the course ADV-09125 were showing off the future of libraries.

The advanced seminar at the Harvard Graduate School of Design (GSD) — aka the “Library Test Kitchen” — just wrapped up its third fall offering on the course schedule. Like a few other classes across the University, its last act of the semester was not an exam but a public exhibit of student projects. ADV-09125 gets extra credit, however, since its final event on Dec. 13 was accompanied by wine, cheese, and fruit.

Near the wine table, guests lounged on the inviting turf-grass mounds of “Library Island.” A few steps away was the tabletop “Toy Library,” whose sign summed up the evening: “Let’s play library!”

Downstairs, Alexandra “Lexi” Bond, a M.Arch.-I student and a clarinetist studying the design future of concert halls, demonstrated the only project of the evening bolted into the ceiling. “Extra Leverage” is a contraption of metal, chain link, and canvas that allows a library-goer to hoist herself or himself to a high shelf. “I’m interested in dynamic models,” said Bond.

Call the creativity and fun a tradition. Last year’s student projects, including an inflatable Mylar reading room, were housed at the “Labrary,” a pop-up experimental library in Harvard Square. This year, the course’s key challenge was along the same lines: Look at libraries as they are; imagine what new devices or furnishings they might need — library machines, in the parlance of this fall’s iteration; then pitch and build fast prototypes. The course is a seminar about thinking up and making up new stuff, while shaking up normal conceptions of the traditional library.

“The motivation is to get students really looking into the library and its future,” said course co-instructor Jeff Goldenson, a designer at the Harvard Library Innovation Lab. He said one aim of the course was “fun” and another was “interestingness.”

Helping Goldenson this fall were Loeb Library Director Ann Whiteside; Jessica Yurkofsky, MUP ’12; and Jeffrey Schnapp, director of the Berkman Center for Internet & Society. Schnapp is also the author, with colleague Matthew Battles, of the forthcoming “The Library Beyond the Book.”

Just across from the cheese plates, architecture critic Alexandra Lange, one of nine Loeb Fellows at the GSD his year, showed off a foldable fabric desktop she called “Bureau-to-Go.” “When they work at a communal table,” she said of library-goers, “they stake out their own territory.”

A few feet away, Jenny Hong, a M.Arch.-I student sat on a comfy chair next to her creation, the “Electric Campfire.” Like Lange’s portable bureau, it was based on observing the real life of libraries, in this case the solitary laptop user often seen sitting near the wall by the only electric outlet. But Hong’s “campfire” — a cubical table arrayed on each side with wireless power outlets — solves the problem of power access and creates a sense of informal community. “It’s more social than your normal library table,” she said.

Ben Ruswick, a M.Arch.-I student, joined two other students to design a 4-by-4-foot outdoor library: 25 linear feet of used books under a hydrophobic roof, complete with shelves, chair, and reading lamp. Above will be a camera taking periodic stills that may stream onto the Web. “We’re interested in the idea that people associate libraries with structures to hold books,” and then shaking up that idea, he said. “This whole course is about re-thinking.”

Hong agreed, and seconded another observation Ruswick had: that the Library Test Kitchen shakes loose levels of creativity that are helpful, especially for a student working on a final thesis. “The great thing about the class,” she said, “is there was a lot of freedom.”

That freedom included being yourself. Early in the semester, students were asked to reveal any obsessions they have that might inform ideas for the libraries of the future. “One of my obsessions is craft and materiality,” said Carmine D’Alessandro, a M.Arch.-I student, who also confessed to being drawn to StoryCorps-style audio storytelling.

So he joined with Kate Brown, a M.Arch.-I student, to create a working prototype of the “Object Lens.” The tabletop device allows a library-goer to both view an object (through a lens for magnification) and to talk about it (with commentary captured on video). “It’s trying to create an experience around archiving,” said Brown. “It’s hoping to capture not just the objects, but the way you relate to them.”

MArch II student Joanna-Maria Helinurm built an immersive environment for teaching preschoolers the alphabet one letter at a time. For the Dec. 13 exhibit, the learning capsule, which is shaped like the turret of a miniature submarine, was primed for the letter “B,” from bushes and bees to butterflies. “I am interested in how kids will learn,” she said, and she’s planning a book on children and architecture.

With the help of a van from the Harvard Depository, the student projects may travel next spring to SXSW Interactive in Austin, the cutting-edge festival of creative pursuits. If so, the long drive will be recorded by “Speed Reader,” a prototype created by Christina Yang and Timothy Carey, both third-year M.Arch.-I students. Side-facing cameras, linked to GPS, would “illustrate” a book as the journey proceeds, with text provided by a classic. (One text synched to the exhibit’s beta version was Jules Verne’s “Around the World in 80 Days.”)

“It does take time to drive a book from A to B,” said Yang, and “Speed Reader” puts the road time to creative use. Added Carey, “We’re remaking the bookmobile.”

Toward the end of the session, with the cheese dwindling and the white wine gone, a Loeb Library patron wandered into the still-buzzing ADV-09125 exhibit. Her eyes went wide and she asked: “What’s this?”