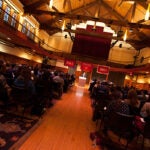 Meet the Labrary, where innovation rules and noise is welcomed

Ever get the urge to print a few words on a graham cracker, with chocolate? No? Well, you only have until Dec. 21 to sample that creation, along with some other experiences you may not have imagined. Like petting a sage plant, or hanging out in an inflatable Mylar hut.

That’s the last day the Labrary will be open at 92 Mt. Auburn St. The student-designed pop-up space, which is open Mondays through Saturdays from 11 a.m. to 7 p.m., explores what libraries of the future might look like. Pop-up spaces are short-term homes for sales, exhibits, and other public uses. From start to finish, the Labrary will have lasted five weeks.

“This whole thing has been a sprint,” said Jeff Goldenson, a Graduate School of Design (GSD) co-instructor in the advanced seminar ADV-09125, or the Library Test Kitchen, where the Labrary projects originated. The other instructors are Jeffrey Schnapp and Ann Whiteside, with help from teaching fellows Ben Brady, M.Arch.1 ’12, and Jessica Yurkofsky, MUP ’12.

“The Harvard Library is changing,” said Goldenson of the course’s co-sponsor. “This is a way to bring students to the table.” The Labrary emphasis is on making things, he added. In a film about the course, Schnapp, who is director of the Berkman Center for Internet & Society, called the Library Kitchen “a fast prototyping laboratory for the future of learning spaces.”

Some student-made fast prototypes seem whimsical. Rola Idris and Pablo Roquero came up with the printing-on-food idea. Their “graham grams,” made on a palm-size platen press, are part of “Millebooks,” a project that illustrates the impermanence of knowledge. (Goldenson said that burned CDs have a life span of seven years.) Next to the little press is a corn tortilla, covered with lines of inked type.

Tony Cho ’14, the only undergraduate represented in the exhibit, came up with “Green Noise,” consisting of three plants hooked to a pale blue, Honeytone baby amplifier. Riffle the sage or tap the bamboo, and you are greeted with an odd little ad hoc concert. Cho was suggesting that people catalogue plants like books, which, he wrote, is “reductive, empirical.” But the objects feel and smell nice too. Future libraries, Goldenson suggested, might include “experience with living things.”

Dana Thomson, M.Sc. ’11, a research associate at Harvard Medical School, used her background in global public health to offer the idea of “massive open online scientific literature,” or MOOSL, as an accompaniment to MOOCs, the massive open online courses that are shaking up online education. “It’s the science platform of the future,” she said, a step beyond science literature that has been digital for years, but that can now add depth through multimedia and interactive platforms.

While Thomson was looking far ahead, GSD student Gabrielle Patawaran used RECON-TEXTS to reinvent the book as a bound, one-off product that brings the digital (her research notes) back into the realm of the physical. Her volumes, differently formatted for annotation, constituted the only bookshelf at the Labrary. (In a few other cases, old books were used to prop up digital devices.)

Brady lay down on a curving plywood stage, hid his face under a laptop, and pressed a button. Voilà! The image of his figure, splayed over a crime scene outline, was downloaded to Tumblr and flashed onto a big screen. Meet “Bookface,” a “participatory photo opera” created by Nicolas Rivard. It’s a way to consider “what we sacrifice by living digital,” he wrote.

A few feet away was Rivard’s BoomBench, a platform seat designed to amplify sound. (Yes, future libraries may not fetishize silence.) “Whatever the future of the library is,” he said, “we’re going to be sitting down.”

Though perhaps not always comfortably. GSD student Hattie Stroud designed “Furniture for Slight Distraction.” Included are one-legged “unsteady stools” to keep you alert, and “topical tables” rigged with speakers that murmur lectures as you think or read. “I study best,” said Stroud, “when I’m in a lecture for another class.”

Study habits of the future — and the libraries that enable them — may well include more noise than is tolerated now. Brady designed a silvery Mylar tent that is kept inflated with a fan. Goldenson looked around at the furnishings: a rug, a lamp, and two beanbag chairs. “It’s been a great meeting space,” he said.

Sitting at a table was Karina Qian, M.P.P. ’14, whose scholarship requires a little noise and company. “I don’t study in traditional libraries,” said the Stanford University graduate. “It’s too quiet.”

The Labrary was a find, she said, because collaborative space can be hard to locate. Qian works at the space every day it is open, and once had a project meeting in the Mylar inflatable. At the Labrary, she added, “you open yourself up to serendipity.”

Local artist and designer Jim Kalambokis sampled a little of that serendipity. He is creative director at the Fullbridge Program in Harvard Square, and “stumbled on the Labrary while grabbing lunch one day.” He was charmed, and set up a display of his book art.

Goldenson likes the idea of a library space that is less isolated than tradition requires, that encourages collaboration, and that puts student work on public display. “We’re trying to make an argument for a public space for the library,” he said.

That includes letting students use it for their own needs, including the study break part that Qian organized.

Said Goldenson, “I want to make lending this space out as easy as taking out a book.”

An upcoming lecture, “Library as Platform,” will be held at the Labrary from noon to 1 p.m. on Dec. 14.