How it really happened 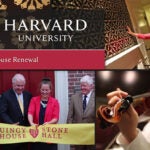 It’s a familiar question for Gordon-Reed, the Charles Warren Professor of American Legal History, Carol K. Pforzheimer Professor with the Radcliffe Institute for Advanced Study, and a history professor with the Faculty of Arts and Sciences. She has heard it at most every event she’s attended since she wrote “Thomas Jefferson and Sally Hemings: An American Controversy,” about Jefferson’s relationship with his slave and the way scholars have treated it. The book was published in 1997.

“I find it hard to believe that [Jefferson] would have just a purely sexual relationship with someone over the course of 38 years, and have seven children with her,” Gordon-Reed said. In addition, there “aren’t any other stories of him being with any other person.”

The strong turnout at the Ed Portal’s final faculty lecture of the fall proved the enduring interest in both Jefferson the man and in his relationship with Hemings. In his introductory remarks, Robert A. Lue, the faculty director of the Harvard Allston Education Portal and HarvardX and a professor of molecular and cellular biology, said Gordon-Reed provided “a wonderful perspective” on history.

“We have the opportunity tonight to hear from someone who changed a view of a particular part of history,” Lue said. “In addition, she has had a profound and broad impact on our understanding of our own history.”

For almost two centuries, many historians rejected the idea of a relationship between Jefferson and Hemings. With “American Controversy,” Gordon-Reed wanted to explore the double standard imposed on the stories of enslaved people.

“Typically, when you see someone who’s oppressed, you pay attention to the victim,” she said. “The victim’s story matters. But here, the victim’s story didn’t matter: [The focus was] on the victimizers. There are lots of reasons to admire Jefferson, but there’s no question that as a slaveholder — as was Washington, as were many other people — they were oppressing a people.”

Gordon-Reed’s “The Hemingses of Monticello: An American Family,” published in 2008, won a Pulitzer and a National Book Award. In it she used Jefferson’s highly detailed daily records to trace the experiences of the Hemingses across three generations, beginning with the life of Sally’s mother, Elizabeth. Shortly after the book came out, DNA evidence linked ancestors of the Hemings family to Jefferson, transforming his legacy into something much more complex.

Rodin Shaw Cole traveled to Allston from the South End to hear Gordon-Reed speak. “I came because I read ‘The Hemingses of Monticello,’ and it made that whole story real for me — it put the whole story in perspective for me,” he said.

The visit was his first to the Ed Portal. “I’m surprised that [Gordon-Reed] was so accessible. This was really a very pleasant event.”

Gordon-Reed said she was grateful for a chance to connect with a group from all walks of life. “It’s a great idea. It builds community, and opens the possibility for people to talk about this subject.”