Happily ever after, sometimes 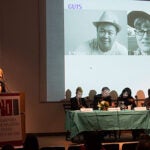 The power of trans

Tell me a story.

That tender and urgent imperative appears to date to early in humankind. “We are simply hardwired to stories,” said Pulitzer Prize-winning nonfiction writer Tracy Kidder. “People like to receive stories,” and to tell them too.

“You can argue with a political question,” added novelist and writing activist Erika Duncan, “but you can’t argue with a story.”

Kidder and Duncan, founder of the Herstory Writers Workshop, participated in a panel discussion Thursday on the uses of narrative and the deep human need for stories that amuse, surprise, instruct, and otherwise make temporary sense of a disorderly world.

“Tell Me a Story,” sponsored by Harvard College Students for Scholars at Risk, drew a standing-room-only crowd to Lamont Library’s Forum Room. The seven-member student group, co-chaired by emcee Madeline Holland ’15 and by Edwin Whitman ’15, adds undergraduate energy to Harvard’s longtime Scholars at Risk chapter, which each year sponsors a brief refuge at the University for four to six writers, artists, jurists, and others whose ideas could bring harm or death in their native lands.

The idea is to “get them out of desperate mortal risk,” said panel moderator and literary scholar Stephen Greenblatt, and restore for a time “what makes life sweet and possible.” Greenblatt is Harvard’s John Cogan University Professor of the Humanities, a Pulitzer Prize-winning Shakespeare scholar, and co-chair of the Scholars at Risk Committee.

At the heart of every Scholar at Risk, said Greenblatt, is a “very powerful life story.” That reality fueled a panel to look at what stories are and what meaning they offer beyond simply imparting facts. “Until the story is appended,” said poet Robert Pinsky, a former U.S. poet laureate who teaches at Boston University, “it’s just information.”

Each panelist told a story either overheard or reported. Pinsky riffed an old King Arthur tale. Duncan related tales from her work with inmates in two Suffolk County jails. In one, a pregnant inmate was asked to walk to speed up dilation; she was in shackles. (Listen to “unwanted stories,” Duncan said later in praise of her obscure narrators. “They’ve been silent because nobody wants them.”) Kidder chose something from his book “Strength in What Remains,” about a young man from war-wracked Burundi who helped heal his nightmares by writing them down.

Harvard’s Jill Lepore, the David Woods Kemper ’41 Professor of American History and a staff writer at The New Yorker, related the 1741 story of hundreds of male slaves imprisoned in New York, accused of being revolutionaries and arsonists. Harvard medical anthropologist Kimberly Theidon, the John L. Loeb Associate Professor of the Social Sciences, told the story of an old man who witnessed slaughter in a Peruvian civil war.

Even Greenblatt told a story about a feckless Harvard graduate who briefly reclaimed his life by saving thousands of Jews in the early days of the Holocaust. “This is a man who somehow found his way,” he said. Greenblatt later told another story, about a troubled Danish prince, who at the end of numerous bloody plot turns urged his best friend to stay alive — just to tell his story, that of Hamlet. (A story left untold, after all, is a death.)

Only one panelist told her own story: exiled Ethiopian political activist and jurist Birtukan Midekssa, a onetime Scholar at Risk and now a student at the Harvard Kennedy School. She had been imprisoned twice, for a total of 41 months, and spent six of those months in solitary confinement. “I could not understand how a person could be treated like that,” she said, “for just speaking, for just telling a story.”

Those practices are repeated, said Midekssa, in many nations where carefully shaped narratives of propaganda are silencing the stories of the citizens. Any national “system of lies,” she said, “can’t stand authentic storytelling.”

Stories “rarely change the world,” said Kidder, “but they are still wanted,” even if just to assuage grief or prompt deep feelings for others. Kidder related the plot of “Misery,” his favorite Chekhov story. A despairing Russian sleigh-driver could not get anyone to listen to the story of his son’s death. In the end, he told the story to his horse, who listened patiently.

Some stories are told “as a moral obligation,” said Theidon, whose work investigates the difficulty that “intimate enemies” in a civil war have in communicating afterward. In the absence of a clear moral, Kidder said later, at least stories are sometimes good at “organizing chaos,” at making the world seem, for a time, that it makes more sense than it actually does.

That was certainly true of Lepore’s story of the slaves imprisoned in New York. The island of Manhattan was then home to barely 10,000 souls, she said, and one in five were slaves. In that era, it was the greatest density of enslaved servants north of Maryland. To modern historians, the dearth of records from the slaves obscures the true story. (In writing history, “there’s always an accountability to evidence,” said Lepore. “That’s the trick.”) But bringing the story alive is still possible, as she did. First, she painted a picture of New York as it was then: a rude town settled just a mile beyond the tip of the island. Fires back then created understandable panic. Bucket brigades formed, said Lepore, “like a row of paper dolls down to the river.”

She made the story come alive, too, by reminding the audience that in 1741 the story had its own storyteller: Mary Burton, a 16-year-old servant who claimed to have heard slaves plotting to burn the city down and then “marry all the white women.” In the end, 17 of the slaves were hanged, 13 were burned alive, and the rest were sent away by ship.

Storytelling technique itself can be a solace, said Pinsky. The story he told took the comforting shape of a fairytale. It was a narrative with dramatic characters (King Arthur, his faithful knights, an ugly damsel); a riddle that carried the threat of death; a good knight, Sir Gawain, who saves the day; and a happy ending (The damsel, once embraced, loved, and given free will, becomes beautiful).

After two hours of stories, the sun had nearly set. Greenblatt called an end to things. “May you all live,” he said, “happily ever after.”