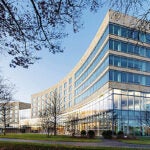 For a poet writing in late Tang-era China, Li Shangyin sure was cheeky.

“My brother read some of the poems I’ve been translating,” said Chloe Garcia Roberts, “and he described them as a classical Chinese Buzzfeed.”

Garcia Roberts, an associate curator in Harvard’s Woodberry Poetry Room, has spent several years translating Li’s work, including a series of obscure lists, which Garcia Roberts, and even her brother, find completely modern.

“The list-poems document one person’s reactions to and interactions with the mundane aspects of his life, and there isn’t anyone alive who can’t relate to that,” said Garcia Roberts.

She calls the list-poems funny and bitter.

“They read like a notebook that you keep in your pocket to write down things that irritate you. One of the poems I really love I’ve translated as ‘Scenery Killers,’ but the basic idea is chronicling things that spoil your enjoyment of your surroundings.”

Next spring, New Directions Press will publish Garcia Roberts’ translations of Li’s “Derangements of My Contemporaries,” the manuscript for which she won a PEN/Heim Translation Fund a few months ago.

Language has always been central to Garcia Roberts’ life. She was bilingual from the get-go, thanks to her Mexican father, and her interest in poetry was sparked early.

“There was a poet in my school’s poetry program, and she came in my fifth-grade classroom and completely blew my mind,” Garcia Roberts said. “Whereas other kids did soccer or piano after school, I asked my mom to sign me up for poetry classes.”

Working with the poet “shifted the direction of my life,” said Garcia Roberts. “Taking poetry out of a book and showing me that actual people wrote it, she taught me how to use poetry as a way to digest and process my life.”

But her life’s direction would shift again, in college.

“I randomly took a class my freshman year, just one that was open, an introduction to Chinese history course,” she said. “The teacher wrote up on the board a character that, in classical Chinese, can mean both ‘heart’ and ‘mind.’ As a product of Western culture, where our hearts and our minds are always at war, to see that they could be encompassed by the same word pretty much hooked me.”

Mandarin classes followed, as well as study in China and at the School of Oriental and African Studies in London. At the University of Oregon, where Garcia Roberts pursued a master’s degree in poetry, she immersed herself in studying classical Chinese. She also discovered Li.

“He challenged so many assumptions I had about what classical Chinese poetry was — that it was all somewhat narrative, nature-based, very spare. Li is the opposite of all that. It’s lyric poetry that’s very lush, very abstract. And I looked for translations of his work, and saw there were very few.”

The grant from PEN is allowing Garcia Roberts to finish the manuscript of list-poems and begin working on a selected collection of his formal poetry.

In her day-to-day duties at the Woodberry Poetry Room, Garcia Roberts assists scholars and others in their research and helps curator Christina Davis plan the room’s programming, which includes a vibrant reading and lecture series. “We’re constantly discovering new treasures,” she said of the room’s famous archives. “And the collection needs to reflect the evolving face of American and international poetry. It’s an English-language collection, but we also definitely want to have poetry in translation represented here.”

Recently, she teamed the Woodberry Poetry Room with the David Rockefeller Center for Latin American Studies to bring Latin poets to Harvard for a three-day symposium on translation and poetics.

“You learn what your own language is capable and incapable of by reading other languages,” she said.

For all her work promoting others’ poetry, Garcia Roberts is finally getting her due. Her book, “The Halfbreed,” was just accepted by Noemi Press. It is to be released in 2015.