A character fit for a novel 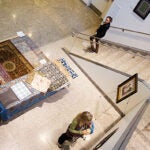 Thanks to Steven Spielberg’s 1993 Oscar-winning film “Schindler’s List,” many know the story of Oskar Schindler, the German industrialist who saved hundreds of Polish Jews during World War II by employing them in his factories.

Thanks to the work of Radcliffe Fellow Julie Orringer, many readers will soon be familiar with a lesser-known, somewhat unlikely wartime hero. Varian Fry was an American journalist and Harvard graduate who helped saved more than 2,000 artists and anti-Nazi activists by way of a daring rescue network in occupied France.

For 13 months from 1940 to 1941, Fry, based in Marseilles, forged papers and planned escape routes for a list of people that reads like a Who’s Who of Europe’s cultural elite. It includes Hannah Arendt, Marc Chagall, and Max Ernst.

“It surprised me all the more reading that list that I had never heard of Fry,” said Orringer on a recent rainy morning in her office at Byerly Hall. On a wall next to her desk, haunting black-and-white photos of Arendt, Chagall, Ernst, and André Breton serve as vivid reminders of Fry’s work. Orringer is writing a novel based on his life during her fellowship year at the Radcliffe Institute for Advanced Study.

An alumna of the Iowa Writers’ Workshop, Orringer initially considered herself content with writing stories — her collection “How to Breathe Underwater” was published in 2005. But an emotional conversation several years ago changed everything. After her grandfather described how he had been conscripted into the Hungarian army as a Jew in 1939, Orringer set out to tell his story with her debut novel. It was while researching that 2010 work, “The Invisible Bridge,” that she encountered Fry.

Orringer had come across an article in the Franco-German armistice known as the “surrender on demand” clause, a mandate that required the French state to turn over German nationals on French soil to German officials.

“When I did a Google search for ‘surrender on demand,’ up came an autobiography of the same title by this gentleman I’d never heard of.”

The more Orringer learned about Fry, the more her curiosity grew. Fry’s memoir raised even more questions. When she tracked down the book’s original introduction she found it “indignant and impassioned” compared with the version that appeared in print. Fry’s editors, she later discovered, worried the public would react badly to reading about “the horrible things that were happening in Europe at the time.”

“I came to understand pretty quickly that there was a lot that Fry couldn’t reveal about his own experience when his book was published in 1945. … The style in which it’s written is very guarded. It’s theatrical in a way,” said Orringer. “He speaks as if he were writing a spy movie about himself. I was wondering who this person was behind this artifice.”

Orringer soon discovered that Fry, who graduated from Harvard in 1930, was just as guarded with many of his friends and collaborators. “A novelist immediately begins to pay attention when somebody talks about obsessive secret-keeping. I wanted to know what his secrets were.”

A window into some of those secrets has opened for Orringer at Harvard. While at Radcliffe she has delved into Harvard’s archives, poring over Fry’s student file to learn more about his College years.

A keen intelligence and rebellious spirit punctuated Fry’s time in Cambridge. When the literary journal The Harvard Advocate refused their work, Fry and classmate Lincoln Kirstein founded their own quarterly, The Hound & Horn. Fry’s intellect was matched by his love of mischief. He was fond of parties and drinking, said Orringer, and was eventually suspended for placing a “For Sale” sign on the lawn at the home of the Harvard College dean.

Included in the archives are letters Fry’s father and the administration exchanged over the young man’s bad behavior, as well as pleas from some of the professors who supported his reinstatement.

“There’s a wealth of material here that I could find nowhere else in the world,” said Orringer, “and that’s in addition to the amazing information that’s available through the Harvard libraries.”

Two Harvard undergraduates are helping Orringer with her research, developing a detailed timeline of Fry’s stay in France and compiling information on the writers and artists he aided.

Why a novel when nonfiction works about Fry’s life, as well as a 2001 TV movie — “Varian’s War” with William Hurt in the lead — are readily available? Orringer insists that fiction offers a chance at a more psychologically layered portrait.

“In a novel we can proceed from a kind of inner perspective that allows the reader the most intimate access to the forces that drive us, and that make us afraid, and that animate us, to the kind of amazing work that Fry ended up doing.”

Orringer’s own life has followed something of a twisting path shaped by her passion. The daughter of two doctors, she was in her sophomore year at Cornell on a pre-med track when she met “living, working writers” during a series of creative writing workshops. Though she had crafted plays as a schoolgirl and won numerous writing contests, Orringer had never considered writing “something you could study or do professionally” until that moment.

When she called her parents to tell them she wanted to become a writer, she held her breath.

“I assumed they were going to be horrified … after a long silence they both began to laugh and they said, ‘We wondered how long it was going to take for you to figure that out.’”

Julie Orringer will deliver this year’s Julia S. Phelps Annual Lecture in the Arts and Humanities at 4 p.m. Tuesday at Radcliffe’s Knafel Center.