Getting to the dark heart of ‘Conspiracy’ 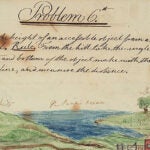 In 1942, 15 high-ranking Nazi officers and German bureaucrats gathered in a villa in a lakeside suburb of Berlin for a secret meeting to discuss the extermination of every Jew in Europe.

In 1997, Emmy Award-winning writer Loring Mandel began to craft a screenplay based on the only known surviving record of the Wannsee Conference, where momentum built behind the Final Solution. His work eventually became the 2001 HBO movie “Conspiracy,” starring Kenneth Branagh and Stanley Tucci.

In 2012, Caleb Thompson ’14 traveled to New York for an afternoon meeting with Mandel and his agent at the Museum of Modern Art to talk about bringing a version of Mandel’s theatrical adaptation of the screenplay to Harvard.

This weekend, “Conspiracy,” a Harvard-Radcliffe Dramatic Club (HRDC) production, premieres at the Loeb Mainstage at the American Repertory Theater. Thompson is the play’s director.

The story has been brought to the stage only once before, in an amateur production in East Lansing, Mich. The film is theatrical in that it presents the conference in real time. Thompson, whose first encounter with the film, as a teen, coincided with a budding interest in the stage, expanded on this notion. The movie, he said, was “remarkable … with a complete unity of time and place.” Also, “I think it offers a portrait of human evil unanticipated by any other work or moment in history. The Wannsee Conference represents a certain human instinct or view of the universe taken to its absolute extreme. In my hubris, I thought this could make quite a good play.”

Lunch in New York led to a series of email exchanges, conversations, script tinkering, and a recent visit to Harvard by Mandel, who sat in on a rehearsal and met with the cast and crew.

Mandel, 85, penned the stage version with an eye toward using the play as a teaching tool and conversation-starter in schools, churches, and synagogues. “At our first meeting [Caleb] asked if I was adamant about making no changes,” recalled Mandel. “I told him that I was always interested in improving it, if there is a way to improve it.”

Throughout rehearsals, the two worked closely to fine-tune the script. While the changes amounted mostly to slight tweaks and adjustments, Mandel also worked through a substantive revision of the end of one crucial scene.

“Loring took the script away, emailed me three or four days later and said ‘How about this?’ ” said Thompson. “It totally solved the problem. It’s fantastic. It’s an indication of his generosity of spirit that he has been happy to rewrite parts of his script.”

Beyond being a boon for the cast and crew, Mandel’s engagement has shown how near the project is to his heart, said Thompson.

Mandel was introduced to the idea for “Conspiracy” in the 1990s by his friend Frank Pierson, a screenwriter-director whose writing credits included cinema classics “Dog Day Afternoon” and “Cool Hand Luke.” (Pierson died in 2012.)

“I had never heard of the Wannsee Conference,” said Mandel. But when Pierson told him it was the first thing he had encountered about the Holocaust that angered him rather than making him want to cry, Mandel grew interested. After researching the conference, he signed on to the project as screenwriter, with Pierson set to direct.

Although the pair wanted to make the film as realistic as possible, confining the action to the conference alone, they fretted that 15 men talking at a table might flop in a culture accustomed to “physical action, explosions, and violent confrontations.”

They had no need to worry. “Conspiracy” was critically acclaimed and won several awards, including Emmys for best actor (Branagh) and writing (Mandel).

Thompson has stayed true to the movie’s sparse model for the stage. The 80-minute play takes place in one room. Though he forbade his cast members from watching the film, he helped them research in detail the inner workings of the Third Reich and the lives of their characters. He also relied on Mandel, who used his visit to offer the actors insight on the motivations and complex relationships of the various characters.

Difficult material is nothing new for the young director. He staged his first play — David Mamet’s charged “Glengarry Glen Ross” — in high school. At Harvard, Thompson has directed plays such as the 17th-century Spanish drama “Life is a Dream” by Pedro Calderón de la Barca, which explores themes of free will and fate, and “Talk Radio,” a play by Eric Bogosian about a truculent radio host.

But directing “Conspiracy” at Harvard, from which so many of tomorrow’s leaders have and are setting out, had special relevance, he said.

While people of his generation tend to associate racial hatred with ignorance, he said, “Conspiracy” makes the point that “the greatest crime in human history was perpetrated by 15 intelligent, educated, enlightened, sophisticated, witty, urbane, idealistic young men.

“The guys sitting at that table thought they were the most progressive society in the world. They thought that they were creating a sort of racial utopia … [‘Conspiracy’] is a kind of reminder that we always have to temper of our intellectual advancement with a moral awareness.”

As for the actors, connecting to their characters has sometimes proved daunting. Portraying profound evil is no easy task. “It’s extremely challenging. If you are to play a part properly or convincingly, some tiny part of you has to empathize,” said Thompson.

Senior Adam Conner, whose roles with HRDC have run from hilarious to heart-rending, said that while he welcomed the challenge of playing Holocaust “architect” Reinhard Heydrich, he also feared his emotions might get in the way.

Conner credited Thompson’s deft direction with getting the most from his cast.

“The improvement in my performance — solely a result of Caleb’s input and direction — has put me in a place I know I would never have gotten with this character by myself.”

“Conspiracy,” supported by Harvard’s Office for the Arts, opens Friday at 8 p.m. at the Loeb Drama Center, with performances to run through Nov. 17 and then Nov. 21 through Nov. 23. This Saturday, Loring Mandel will take part in a discussion following the show.