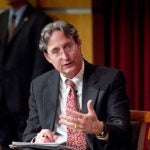 Political experts, historians set sights on getting past capital gridlock

As the country struggles to regain its footing following last month’s federal government shutdown, public outrage and dissatisfaction with Congress and the White House are at an all-time high.

To many, elected officials in Washington appear to do little more than bicker and obstruct good-faith efforts to resolve some of the nation’s economic and social problems.

“Around the world, people looked at us and scratched their heads and began to wonder about the United States: Is the American Experiment unraveling?” Harvard President Drew Faust said as she opened a panel on capital partisanship and gridlock at Harvard Kennedy School’s (HKS) John F. Kennedy Jr. Forum Wednesday night. “I think we all are searching for answers.”

Karen Gordon Mills ’75, M.B.A. ’77, administrator of the U.S. Small Business Administration from 2009 to this year and currently a fellow at the Institute of Politics (IOP) at HKS, moderated a panel that included Alex Keyssar, Matthew W. Stirling Jr. Professor of History and Social Policy at HKS; Mark McKinnon, a political analyst and media adviser; Theda Skocpol, Ph.D. ’75, Victor S. Thomas Professor of Government and Sociology and former dean of the Graduate School of Arts and Sciences; and Hilda L. Solis, until recently the U.S. secretary of labor and now a visiting IOP fellow.

The panel considered the governmental stalemate in light of similar, earlier periods in American history, such as the Civil War and the Great Depression, when political acrimony also threatened to bring the federal government to a standstill.

“One thing we learn is that those moments were moments when there was a whole lot at stake and there were really severe disagreements about policy and disagreements that didn’t seem to some people to be bridgeable or compromise-able,” said Keyssar, a political historian. “It would almost be a betrayal of your principles to compromise, and I think that’s something like what we’re seeing today.”

Skocpol said much of today’s gridlock is stoked by a belief among a small but powerful faction within the Republican Party that compromise is a sign of weakness and a capitulation of core values. She noted that close to two-thirds of House Republicans voted against lifting the 16-day shutdown even in the face of 80 percent public disapproval ratings, a development she called “astonishing.”

“That tells us that this is not a problem that can be solved by just getting people in a room to be nice to each other, even though I’m for it. There’s something larger going on here,” Skocpol said.

While media bias on both ends of the political spectrum exists, the panelists said, more troubling is the public’s growing consumption of “self-reinforcing media” and the press fixation on partisan provocateurs.

“What’s more problematic is that there’s an inherent bias toward friction and train wrecks,” McKinnon said. “The media generally is not going to go out and write an ‘Everybody’s getting along together’ story. They love food fights.”

While, historically, turnout among middle-class and upper-class voters remains good, the rancor in Washington contributes to a growing public distrust of and disconnection from the political system as a whole.

“There certainly seems to be a lot of evidence that part of it is that working-class people and poor people don’t see that there’s much in it for them either way,” said Keyssar. “And frankly, I don’t think you’re going to get an increase in turnout until that changes and until they really do see that it will really matter to them.”

The failure to unclog the machinery of Congress will come at a high price, said Skocpol.

“The harm will be both human and economic. And the other kind of harm that comes when our country cannot address pressing problems like full employment, improvement in our way of funding higher education … is that the population comes to think that our government and our democracy can’t work,” she said. “And that’s a terrible cost no matter what the unemployment trend is because it turns off people, particularly young people.”